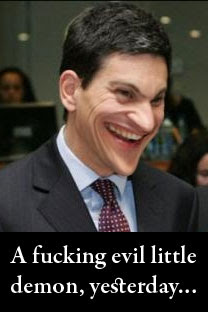 Prodicus has a superb post up, excoriating that fucking little cunt, Batshit, for his treason.

I write to explain why I shall be among thousands of angry and despairing British citizens attending the Referendum Rally in London on Saturday 27th October and why I and others now urge our fellow citizens to overturn hundreds of years of highly developed Parliamentary tradition and demand a national plebiscite on the Reform Treaty.

In refusing us our referendum, you repeatedly say that Britain is a Parliamentary democracy; that the British people have chosen to send representatives to Parliament and to allow themselves to be governed by their decisions; that it is not our national tradition to resort to referenda. (You wish us to overlook the fact that it is your political party which has repeatedly used referenda when you have found it convenient, and you cannot possibly imagine the contempt in which you and your associates are whenever you dishonestly pray in aid 'tradition'. Your government has done more than any other in recent centuries to destroy our traditions, jeopardising coherent governance and the integrity of the nation itself.)

But you are right - we have not customarily used referenda. However, something so fundamental has changed because of your government's actions that we have no choice but to use the referendum to preserve our democracy and our right to self-determination.

You and the Prime Minister intend to castrate our Parliament by giving away to the European Union the power which was loaned to you by the British people in order that you could protect and defend us. You intend to pass this power, permanently and beyond recovery, to a foreign power while knowing exactly what you are doing and while lying about it to us even as you do it. You are doing this this not only without our consent but against what you know to be our wishes.

Your government has become a dictatorship. You are following the same pattern as dictators throughout history: you have accepted the acclaim of the people and then turned the power they have given you into the means to ignore and oppress them...

Do go and read the whole letter: beautifully written, concise and compelling, it is a true crie de coeur and one that all too many of us wish we might have penned.

Your humble Devil will be there, on Saturday, marching in the Pro-Referendum Rally: join us! And maybe we should sort out some kind of meet-up involving copious amounts of drink...
By Devil's Kitchen at October 23, 2007

Has anyone suggested a pub to meet up at for a few pre-rally drinkies?

It would be an honour to finally meet up with your good self, the humble Devil. (and hopefully, many other bloggers..)

Their bullshit lies are what pisses me off the most. If they stood up and told us why we needed to sign over these powers I might listen.

I read some of the debate online earlier and it was just lie after lie. I will be there on Saturday.

We will blog this on BBC-Biased as well

A top notch piece of work, fisks the entire governments attitude towards us plebs, well said that man.

What do UKIP care about a referendum? We had them in Scotland and Wales saying 'Yes' to devolution, and yet UKIP seeks to abolish the Senedd and Holyrood. Seems to me that a referendum is only valid when it suits your tastes...

Wild horses wouldn't keep me away

fucking hell. the bastards fucked up the Scottish election on PURPOSE according to an independent report. all those tens of thousands of "spoiled" votes.
douglas alexander to blame.

christ - this is like something out of fucking Mugabe's Zimbabwe.

if its any consolation ordovicius, there are rather a lot of people, including me, south of the border who are warming to the idea of an independent England. i'm not a member of UKIP though.

Does anyone know if there is likely to be any rioting at the demonstration. Also what political leaders are going if any.

One last question I saw the libdems on question time and think they asked whether the referendum should be whether we should be in europe at all. I couldn't understand that comment as I thought that the libdems were really for it. I did hear that correctly didn't I, can anyone varyify. It was even a minor feature on the news so you might have not seen question time but still seen it.

I hope the libdems are anti eu it is about time that some one was. Also I am not sure if the leaders at ukip are that genuine. There was a news paper article about nigel farage about six or seven months ago which basically said that he had his hand in the till and apparantly it was campbell bannerman who leaked it. Can any one varify. Also I have heard from other sources that their accounting is to say the least creative.

beware of the Fib Dems - by looking at Nick Cleggs biography on Wikipedia it clear that he is 100 per cent signed up to the EUSSR.

I think the FibDums want the EU- "in or out" as a form of brinkmanship, hoping that the rest of the country is as cowardly and spineless as they all are and bottle it.

The Lib Dums promised a referendum as well as the Labour Party and are equally lying through their teeth. Its just that no-one notices .


I would like to go as well.If there is any suitable drinking hols i `ll be there

using PintSearch i see a two nearby watering holes:

Yes, I am partial to St Stephen's myself; the only problem being that both pubs are quite small and, if there are lots of people, it could get very crowded...

But I would say, provisionally, that St Stephen's from 11 would be good. I just need to check with another group that I need to meet...

oh dk - bring some DK t-shirts if you have any. i'll buy one off you.

I'll be trying to make it to the rally, other commitments permitting. But I really wanted to comment on the photo - Batshit looks like a the bastard off spring of Mr Bean and the Joker. Although he lacks the charisma of either of those characters.

David Miliband's father and grandfather were avowed Communists, and therefore no friends of democracy - see

from which I quote verbatim:

"It is often noted that Miliband's father and his grandfather immigrated to Britain from Belgium 67 years ago. What is not mentioned as often is how did they get to Belgium.

Miliband's father, the late Ralph Miliband, the leading British communist, and his grandfather (RM's father), the late Samuel Miliband, emigrated to Belgium from Poland. They were Polish Jews, i.e. Poles of Jewish origin.

87 years ago the Soviet Army invaded Poland. David Miliband's grandfather was called to serve. As a Polish citizen he was obliged to join the Polish military. Not only did he derelict his duty, he even joined the Soviet Army, i.e. he committed treason. After we Poles defeated the Soviets, Samuel Miliband left Poland (knowing that otherwise he would be executed as a traitor). He went to Belgium and from there to Britain.

David Miliband is a 3rd generation communist. He is a traitor just like Chamberlain, Iudas (spl?) and Bliar."