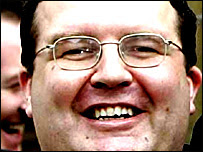 Guido points out that Tom Watson MP, who describes himself as "an overweight opinionated member of parliament", should probably add the phrase "lying bastard" in there somewhere.

With a reputation for accurate and balanced reporting to protect, Guido was troubled by this, perhaps Tom Watson was not a treacherous, lying plotter who met and connived with Brown on the eve of his coup attempt against Blair. Maybe he was not going to return to government under Brown. Guido offered to retract the allegation if he promised not to return to government.

Tom Watson has rejoined the government as a junior whip. Therefore, one can say, quite categorically, that Tom Watson is a mendacious, hypocritical bastard with all of the principles of a particularly untrustworthy ocelot.

I note that the comment was not made in a newspaper or TV, or in the House of Commons, but on Guido's own blog.

Couldn't Watson argue that telling lies to Guido is a special, defensible case?

Well, Robert, I would agree if I thought that lying to the media or in the Commons was any more of an offence than, say, lying to your constituents or, indeed, anyone else.

Or do you think that it is OK to lie like a bastard as long as it isn't written down all official-like?

I think DK is right, but we do need to differentiate between 'official' lying (e.g. to Parliament, MSM and, possibly, spouses) and unofficial lying (i.e. to everyone else).

In this case Watson was merely unofficially lying, so that really is a minor consideration, isn't it?

Of course the difficulty for most of us is to know when lies are actual 'official' or 'unofficial' lies. Maybe we can have some guidance handed down from the most suitable Government Department.

Perhaps Brown can find the time to appoint a Minister for Lies - just to help us all, you understand. He won't be able to advertise the post of course. There are far too many truly accomplished liars in Government. It would take an eternity to bring all the applications down to a short list.

Or do you think that it is OK to lie like a bastard as long as it isn't written down all official-like?

Why such a slur on ocelots?

Come on. You couldn't give Guido the time of day without him then inviting his little chums to gather round and hurl pre-pubescent abuse.

Watson's merely showing Guido the same level of contempt that Guido shows everyone else.

It's a Brownite plot, I tells ya!