Young Dizzy has pointed out that Recess Monkey's Wikipedia entry is up for deselection on the grounds of lack of notability.

So, naturally, your humble Devil followed the link to Wikipedia and has generously decided, as an act of pure charity, to preserve it in internet aspic, here at The Kitchen. 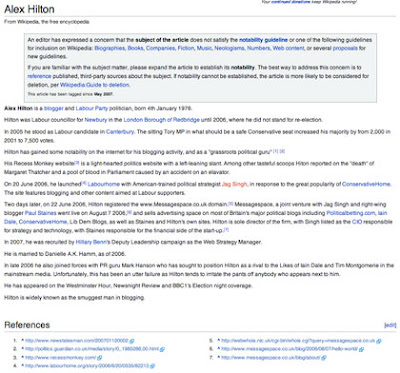 So smug and tedious is the entry (not to mention that whoever made it can't spell "elevator". Oh and, in this country, we call it a "lift", damn it!) that one does rather suspect that it might have been written by Hilton himself.

Although one suspects that it was not him who added the following lines. [Emphasis mine.]

In late 2006 he also joined forces with PR guru Mark Hanson who has sought to position Hilton as a rival to the Likes [sic] of Iain Dale and Tim Montgomerie in the mainstream media. Unfortunately, this has been an utter failure as Hilton tends to irritate the pants off anybody who appears next to him.
...

Hilton is widely known as the smuggest man in blogging.

Poor Alex! Still, at least the vandals' opinions will vanish when the entry is deleted...

UPDATE: Hilton's resemblance to another smug bastard has also been noted a few times; strangely, Miliband also had a problem with a Wiki a little while ago.

Are the two related? I think we should be told immediately. No, seriously...
By Devil's Kitchen at June 06, 2007

PS: Who's this Hilton guy anyway?

PS: Who's this Hilton guy anyway?

Ha! Are you a Wikipedia editor...?

Are they seperated at birth?

For the record I'm older than you, you ugly twat*

Hilton is widely known as the smuggest man in blogging.

You know I love you DK, but do you know the definition of 'smug'? I wouldn't call that big nosed cunt 'smug' as that confers on him a certain cache.

No Wik entry, but Cambridge Dic defines smug as: too pleased or satisfied about something you have achieved or something you know:

So what the fuck has this cunt achieved apart from notoriety as a cunt? Also, he knows fuckall and is a mean spirited and self obsessed cunt with his nose up New Labours unclean and dingle berry covered fucking ring piece.

Change the post entry and where there is a mention of 'smug' replace it with cuntish, because that would far nearer the mark.

Ha! Are you a Wikipedia editor...?