All Aboard for the Fringe

Long-time readers who have managed to plough through my inarticulate, alcohol and drug-fuelled Fringe ramblings may remember that for the last couple of years, myself and a couple of friends have ended up in bars, in the small hours of the morning, singing hits from a children's compendium called All Aboard; this LP featured such classics as Ernie, the Fastest Milkman in the West, Alright Said Fred, The Laughing Policeman, The Runaway Train, The Gnu Song and, of course, Rolf's maudlin and simultaneously uplifting Two Little Boys...

Last year, Caro, Macca and myself were joined by a newbie.

This year, we have already indulged in the same practice, but joined by Tim Fitzhigham, a splendidly bearded and very proper gentleman...

I suggested that we should actually produce a show, starring Tim and Macca, based on All Aboard and put it on in the Fringe. It was basically a joke.

But, bloody hell, they've actually decided to do it! 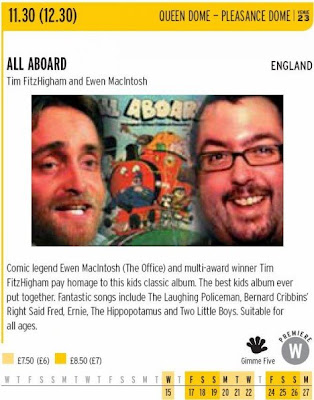 I expect a free ticket, you know...

Meanwhile, your humble Devil is reprising his role as the near-alcoholic, philandering, philosophy lecturer, Ray, in This Lime Tree Bower during Weeks 2 and 3 of the Fringe this year.
By Devil's Kitchen at June 25, 2007

your humble Devil is reprising his role as the near-alcoholic, philandering, philosophy lecturer, Ray

Having seen this before Christmas, I can vouch for the quality of the production. The way he immersed himself in the role by drinking heavily beforehand! The way he forced himself to flirt with the waitress who kept serving us beer! How he stayed in character, even hours after the end of the play!

Such dedication! Clearly the role you were born to play, DK...

Blimey, we've got that LP somewhere. I too know all the words to all the songs. I'll be singing them all day, now. Hm.

A particularly hard stare on its way to you.

As much as I detest the festival, I might drag myself along to see you. I'll bring rotten fruit, just in case though...

The way he forced himself to flirt with the waitress who kept serving us beer!

She kept filling my wine glass for free too...

As much as I detest the festival...

I rather enjoy it, but then I am always involved in some way, which makes it a whole lot more fun. You feel justified getting into all these parties, etc.

I also have my pet PRs who insist on introducing me to their vaguely famous clients, including the one who introduced me as "the guy you need to know to get anything done at the Fringe"...