Kofi Annan: as venal, corrupt and hypocritical as the rest of them 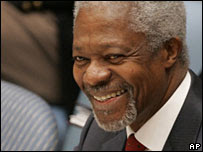 For a man so steeped in appalling acts that he should have crawled away and died of shame by now, Kofi Annan certainly looks a good deal happier than he should, and he's still opening his fucking trap far more than he should too.

The ex-secretary general told the joint Houses of Parliament that hardly any region of the world escaped the slave trade's historical "stain".

Can you guess what the grinning bastard thinks might make everything OK? Go on...

But investment would help "turn the page", he said in an address marking the bicentenary of slavery's abolition.

That's right! Pouring more cash into the black hole that is Africa will, in fact, help wash that stain away. Well, wasn't that a surprise?

Mr Annan described slavery as "an abominable practice taken to its most abominable extreme" and said the question should be asked why the trade was "tolerated for so long" in Britain.

Perhaps Mr Annan would like to ask, more pertinently, why it was tolerated for far longer in the US, Portugal, France, Belgium, etc. But then I suppose that he is addressing our Parliament rather than theirs.

Although, of course, he might wish to thank Britain for spending more money stamping out slavery than it actually made from the trade.

Many Africans believed they had still not been compensated for the damage caused by slavery, he said.

But since their leaders were willing participants in that trade, then it must be true that the African leaders of the time—or, rather, their descendants—are liable to pay reparations too.

Quite apart from that, the British are less wealthy now than we were because we fought slavery. So, as Timmy points out, there are reparations due to us too.

We must pay reparations because our forefathers profited from the slave trade. However, our slightly more recent forefathers paid quite heavily to suppress the slave trade. Indeed, they paid more to suppress it than did the earlier group profit from it. And whom did this expenditure benefit? Clearly, if slavery is a harm, one that must be compensated for, then the benefit accrues to those who were not enslaved, as a result of said actions. So the harms suffered by 19th century Britain (greater, as we note, than those gains accruing to 18th century Britain) should be compensated by payment of reparations from the descendants of West Africans who were not transported.

And as we note, those reparations should be higher than the "Big Claim". Let's call it a round £ 10 trillion shall we? Good. So, when that's handed over then we'll take our cut, the impoverishment we suffer in the present because our forefathers, instead of investing in industry, educating the illiterate or building the productive resources of the nation, instead, decided to spend the gelt sweated from the labours of the nation on suppressing a vile barbarity, and then pass on the £7.5 trillion to the descendants of those who were indeed enslaved.

Quite; where's my cheque?

Now, you might argue that this is a stupid claim to make, that the Africans should not owe the British any money but, as we bloggers have pointed out many times, if you are going to use an argument as stupid as slavery reparations in order to try to balckmail countries into pouring yet more money into Africa's gaping maw, then you must expect to be countered with equally fatuous arguments.

And with Africa likely to be the only region of the world to not achieve the majority of the UN's Millennium Development Goals by 2015, he said the damage could best be addressed through investment in poverty relief.

I see. And why is it that resource-rich Africa is the only region in the world not to achieve these goals? Could the appalling governance be anything to do with it? After all, that continent has had the equivalent (as I recall) of four Marshall Plans poured into it in the last forty or so years, and yet one sometimes feels as though the whole damn continent is regressing.

But then perhaps it's just that I've just been reading too many news reports from Zimbabwe. And Sudan. Oh, and Somalia. And Chad, Ethiopia and Eritrea. Er...

But it is with this little paypacket that that bastard Annan really boiled my fucking goat.

However, with thousands of women and children being sold and exploited globally every day, slavery still existed, he warned.

Many were "working in mines, sweatshops, brothels and plantations, trapped by debt and violence," he said.

"Slavery cannot be relegated to the annals of history so long as men, women and children are still being coerced, drugged, tricked, and sold to do dangerous and degrading work against their will."

Well, Kofi Annan, as the recently departed head of the UN, would know all about that, wouldn't he? After all, UN peacekeepers have been heading off allegations of their officials running child prostitution rings and sex-for-food scandals for years.

This cunt has presided over this; this grinning jackanapes has sat at the head of the UN, embroiled in his own scandals, whilst his troops sell and fuck anything that moves (and the younger and more vulnerable the better, as far as I can tell) and this bastard presumes to come and lecture us on such things.

That he should do so only a short time after the UN has had to pass a resolution reaffirming that there should be zero-tolerance for kiddie-fiddling and pimping. Croydonian put it very brusquely.

The organisation that has to pass resolutions showing it knows right from wrong
...

"Addressing its comprehensive review of a strategy to eliminate future sexual exploitation and abuse in United Nations peacekeeping operations, the Fourth Committee (Special Political and Decolonization) recommended this afternoon that the General Assembly reaffirm the need to implement a zero-tolerance policy towards such behaviour, and to assist victims of sexual exploitation and abuse by the Organization’s staff or related personnel".

It is beyond shameful that it has to do this.

Beyond shameful is right but it's more than Annan did. So what the fuck? How fucking dare he come here and lecture us on slavery and corruption?

Of course Annan knows that there is still slavery in the world: he was head of one of the main organisations involved in carrying out and promoting it.

Addressing the joint Houses of Parliament is considered an honour.

Is that so? Well, no honour accrues to our Parliamentarians by being addressed by such a fucking corrupt, morally-bankrupt little demon. Did no MP or Lord have the courage to walk out of that room in disgust?

I would have. But only after reminding everyone in that room of Kofi's crimes. That man should not be in the Mother of All Parliaments, he should be in the dock.

Oh DK - what a way you have with words! I have never head anyone talk about the billions we have poured into Africa over the past 50 years as aid, as being an appropriate monetary compensation for both colonisation and slavery. We all want Africa to raise its living standards, it is painful to see what is happenning from Dafur to Zimbabwe. Could I be forgiven to suggest that Koffi Annan also reflects on the waste, corruption,disease and poverty that blights his continent, and ask himself "what happened to all this money?"

and ask himself "what happened to all this money?"

All he'd have to do is check the balance of his Swiss accounts...

you would take a cheque from an African nation ? bugger me DK.... I thought you were sharp.

Should we not add to that £10 trillion the compensation we are owed from the Middle East for their slave trade (1.5 million Europeans I believe)?

And our wonderful parliamentarians just sat there.

Kofi should take a look at African slavery, still going on in the Sudan.

Bliar and Labour will lap up this stinking sphincter juice like everything else and make a plan for an apology and statue, like they ahev with that other fucker mandella.

You can' really blame them when mongs like Bliar are happy to cave in as far as they can.

Kofi Anan. Track record. 800,000 dead in Rwanda as a direct consequence of his intructions to UN troops in region not to take action. The filthy fucker should be handed to the Lords Resistance Army for reducation. His son a corrupt exploiter of Saddam's petro $ scam. Anan represents everything that is corrupt in UN.

Kofi's address boiled my fluids too.

So many other places to bitch this up but almost the LAST place you should come to to moan about slavery is in the UK HoP. He is utterly shameless.

I can see now where his son gets it.

Jan Tregeagle - I was going to suggest that the Africans turn to their own people (who captured them and sold them into slavery) and the Arab slavers - still extant today - for "compensation". The Saudis can afford a trillion or so. So can the Kuwaitis. That's where the Africans should be looking. The traffickers.

John Lancaster writes: "We all want Africa to raise its living standards."

Well, I don't, in particular. They've had tens of billions over 60 years and they've allowed their "strong men" to steal it all. How is this our responsbility?

The only thing I would do for Africa is chop EU protectionist measures off at the knees and open up our markets to all comers. If the Africans make a go of it, welcome to the wonderful world of capitalism! If they don't, well that's life. They're not children. We owe them nothing.

what a way with words these UNists have. you almost have to admire them;

compensated for the damage

We must pay reparations

Kofi should read this essay on 'Welfare Is a Curse' by Oz's most respected Aboriginal leader, Noel Pearson,

At present the welfare system provides unconditional income support to young people once they leave school. It immediately provides an easy option to young people: you don't have to undertake further education or gain skills or work, because you will receive an income regardless. We have to end unconditional welfare payments."

While struggling to bring up two children of your own,also living on your tax monies are the asians five,and the africans thirteen,another eight billion from brown to provide the african criminals with new bmws , and they want reparations!slavery is still rife in south africa,the trade is worth fifty billion rand a year,and it is all the fault of evil whitey,but it does not seem to stop them beating a path to our door when they want yet another hand out.stand on your own two feet africans ,we had to.