Needless to say, the whole thing is screamingly fast (even with Photoshop running under Rosetta emulation) compared to my four (?) year old G4. 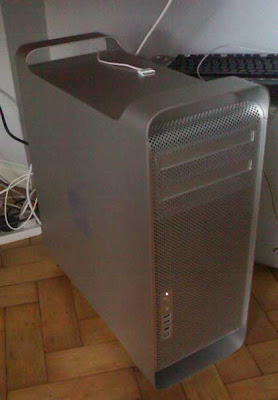 Yes, that aluminium enclosure is lovely (and makes a great sound when you tap it) but it's the inside which is an engineer's fantasy... 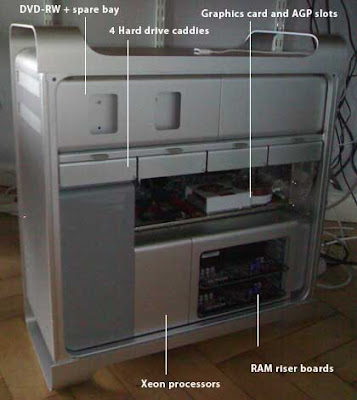 Everything neatly packed in with no trailing wires, etc. The hard drives simply fit into the caddies and then you push them into place: there are no fiddly wires to connect. The RAM chips are mounted onto riser boards (which come out of the machine completely) and fit into place very neatly.

Most importantly, having been used to the "wind-tunnel" G4 PowerMac, this machine is almost totally silent. All I can hear is the occasional whirring of the hard drive.

Having said that, my old G4 (pictured below) is far from obsolete. It's a Dual 867MHz processor G4 PowerMac, with two hard drives (60GB and 120GB) and 1.5GB RAM, with a multi-layer DVD-RW and decent graphics card (can't remember which one just now, but it's 64MB, I think), Bluetooth, Ethernet, a keyboard and Apple Mighty Mouse (up to seven programmable buttons). 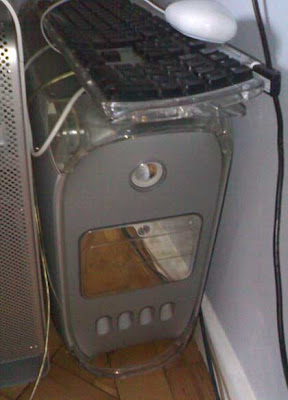 Although I shall be sad to part from my faithful friend (yes, I do feel that strongly about my Macs: it's a wrench letting any of them go), if anyone wants to make me an offer, feel free (I will take a working version of Windows XP (which I can run on my new machine) as part exchange, by the way: I need to test websites in Internet Explorer). Otherwise, the poor chap will be going onto eBay, I suspect.

DISCLAIMER: thanks to The Dude, I have realised another dream, and now own 248 shares in Apple...


* If any Windows users want to point out that Macs are crap, please, just save your breath. Unix/Linux geeks will be tolerated since the Mac OS is essentially a Linux system these days. And, yes, you can shell into it directly, through the Terminal application.**

** Similarly, people pointing out that a computer is "just a tool" will also get short shrift. A pen is just a tool, but there's a massive fucking difference between a biro and a good fountain pen.
By Devil's Kitchen at February 27, 2007

Nope. I still don't get it.

The new Powermacs are great engineering - 4 drive bays again. Simplicity and usability are so hard to achieve yet so simple to use (and often unappreciated).

I had a Dual 1.62Mhz version of your old G4 and that was a hovercraft when it got busy but a lusty performer at the time. Am now on a G4 Powerbook and the lack of second CPU really bites.

An 8-core Mac is due at some point, so I might be tempted to plump for one of those then.

Otherwise my 7 year old G4 400Mhz will do as a standby desktop.

I am totally with you on the mac front. I was a long time PC user and converted to a 12" PowerBook G4 18 months ago. It is a workhorse. It never lets me down. I've never had to reinstall my operating system and it just gets the job done. My one complaint is that Excel is not great on the mac. Other than that I will never go back. By the way, I'm going to Digg this article.

When will Mac snobs realise that for a little under 2k you can get a better spec than that, and the same manufacturer, with quad core intels?

This piece of rubbish is already obsolete and you paid how much?

I know it's pedantic, but OS X is a form of BSD unix, not Linux. Having just seen a small contribution of my own make it into the FreeBSD ports tree - albeit just a couple of lines of comment in one file - I'm feeling protective. Apple forked FreeBSD, called it Darwin, and put the nice interface on top.

I think Mac OS whatever and Windshite are just marking time before Linux, in whatever form, takes centre stage from them all. Microsoft is developing a form of Linux, so even they know the writing is on the wall.

Shotgun - "When will Mac snobs realise that for a little under 2k you can get a better spec than that, and the same manufacturer, with quad core intels?"

Maybe, but it will be thrown together with very little thought given to the overall design of the product and will be a mess of OEM parts. Oh yeah, and with the greatest respect to Linux, you'll probably have to run windows... which is shit.

You may have missed my "Windows people get stuffed warning" but I have just speched a Dell for the same (roughly): £3,324.00

Argh. And I thought I was sad.

I am worried about you.

There is help out there you know. Get a life. Take a mistress - you can't shag an Apple, there is no slot.

That will be 20 guineas