The Gobblin' King is green 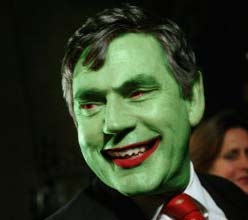 The Green Gobblin' King: stealing your babies in ever more devious ways. (I know that this is bit of an old joke now, but why should everyone else have all the fun?)

Having been derided for his lack of "green" credentials by the various loonies on the Left (the Tories and the LibDems mainly) for his minor adjustments to petrol and flight tax, it seems that Gordo really is green. Because, you see, we all know that computers use lots of power (there are, after all, so many of them); but, let's face it, if people didn't write software for the damn things and if other people didn't go around selfishly supporting and fixing them, then we wouldn't use computers so much. Thus we would save money and damage the planet rather less, wouldn't we?

A commenter pointed me towards this story which shows The Gobblin' King's true concern for green issues. In order to make it more expensive to use computers in general, our Cyclopean Chancellor has very generously decided to tax them even more! Are you surprised? I know that I am. Not.

The biggest shake-up to contracting since controversial tax rule IR35 was introduced has been unveiled by Gordon Brown.

Delivering his tenth pre-Budget Report, the chancellor yesterday tabled new laws to dictate freelance IT contractors will pay the same tax and NICs as employees.

What. The. Fuck? I do wonder what Allan would make of all this: he was never the biggest fan of IR35, and he points out why this is inherently unfair.

The handsome pay was fair compensation for no job security and for giving up many rights that employees so often take for granted. I had no holiday pay, no sick pay, no employer pension rights and as director of a limited company, no right to unemployment benefit if the work dried up.

From April 2007, draft legislation will strip away the "unfair competitive [tax] advantage" for hundreds of thousands of contractors who today use managed service or composite companies.

Unlike limited company owners, these workers are "not in business on their own" and the underlying nature of the contracts "is one of employment," the government decided yesterday.

Therefore, these workers, many of whom occupy the IT, Construction and Engineering industries, must pay employment taxes.

So, even though they are freelancers, with all of the penalties that that brings with it—no paid holidays, irregularity of work, having to pay an accountant to do the tax, etc.—they must pay taxes as though they were actually receiving the benefits of being proper employees (and receiving paid holidays, regular work and not being burdened with the massive self-assessment form—and the accompanying 56 page, 60,000 word explanatory booklet—every year).

In the "vast majority of cases," the government added, MSCs break IR35, designed to ensure the right tax treatment is applied, meaning workers get away with reducing their tax and national insurance payments.

How dare those workers get to keep some of their money! How fucking dare they!

For fuck's sake, who's advising the Gobblin' King these days: Richard "you have no money but what belongs to the government" Murphy?

HMRC compliance officers also report that managed service companies have been paying travel and food expenses free of tax and NIC - even when no relief is due.

As a result, workers who use managed service companies will, in the future, be exempt from the Intermediaries Legislation (IR35), but face more stringent rules that will be "less resource-intensive" for HM Revenue & Customs.

Ah, yes; those poor civil servants are feeling the strain and really, really need a rest.

A consultation document published alongside the pre-Budget Report says defining a managed service company under the incoming law is not "straightforward."

Well, it never bloody is with the Gobblin' King, is it? That is why Tolley's (the Tax Guide for accountants) has doubled in length since Gordo took over.

"The government has now announced new legislation that deems all those working within these MSC or composite structures to be employees, so they will have to pay the same NICs and tax as employees."

"However, those who control and manage their own companies have been clearly told that they are not the target: the old IR35 rules will remain in place as before for these "personal service companies."

Some twat at the treasury hasn't fucking worked this out, have they? The reason people use the Giants of this world is that it's a lot simpler than running your own firm.

What these Terry Fuckwits at the revenue don't seem to understand is that the moment they introduce this change, every contractor in an MSC will just get a limited company set up, because the incentive to pay less tax is far greater than the overhead of running a company (and the accountant does most of the work anyway).

So, in fact, they'll still have to go through the whole useless fucking IR35 thing, whilst burdening contractors.

That's it. Scrap NI and people will no longer set up companies merely as tax-saving structures, because there will be no incentive to do so.

[so he's clearly a nut, but I like the prescription...]

Never mind, DK, he's not going to be PM that long anyway and then we can concentrate on Dave.

MSCs were always going to be a target for the revenue boys. But don't dispair - the limited compay option is still very attractive.

I have run my own limited company for 5 years and have never been on the wrong side of IR35 (close a couple of times). I also now do my own annual accounts which saves a grand a year.

Those nice people at the HMRC even gave me a rebate last year because I filed the accounts online, and I ended up paying negative tax overall - stick that in your pipe and smoke it Gordon.

The downsides are a bit of extra work and having to be very careful about how my contracts are set (I always try to work fixed price against a fixed work schedule).

I suspect that the Terry Fuckwits are actually fully aware of what they do. The problem is they hate small and micro businesses.

Why? Because, unlike large corporations which find a way to operate under nearly all circumstances, small businesses and independent consultants are vocally opposed to tax and bureaucracy; all the things civil servants hold so dear.

Thus the socialists and the bureaucrats will do anything within their power to cripple these small enterprises. Sadly, they have yet to cotton on that these are the very same enterprises that really drive an economy. Or they don't care.

Hey DK... as you know I have been out of the blogging game for a couple of months now. I am currently in hefty negotiations searching for a new job. I have a decent opportunity at a very well paid contract, but I find myself put off by the IR35 complexity of it all. It is sickening, disheartening and far too close to bloody Christmas.

Right pissed off at the moment and this latest pre-budget crap has just made me worse. It seems that Gordon has made it almost impossible to start a small business.

Christ, now I am just plain angry. 11 Downing Street isn't too far away from here... I might have to make a small detour at lunchtime ;-)

Search HMRC's website for "thieving" and the second result is TB47 - IR35.

IR35 is mainly designed to help the big consultancies who totally coicidentally are large sponsors of ZanuLabour.

I hope not and if any labour people are doing their research they must be shitting their pants.He's goes down like a sack of shit everywhere

reid must be in with a shout