Within minutes of my Flat Tax critique being posted, I had been solicited by the London Evening Standard to write a letter on the subject. So here it is: 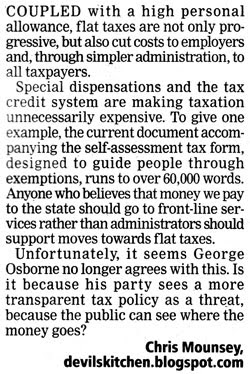 Above mine appeared a letter arguing that Flat Tax was not a good idea; it was written by a gentleman calling himself Richard Murphy of taxresearch.org.uk. Now, far be for me to put the boot into someone who is, I assume, a professional, but his letter was so full of bollocks that I fear that I must go out on a limb and do so.

However, in mitigation and to avoid any misunderstandings, let me point out that my letter—which, deprived of a Word Count Tool or the internet-connected leisure that I would like, was somewhat prolix—was edited and so, were you more charitable than I, you might feel like giving Mr Murphy the benefit of the doubt. Your humble Devil, however, having been away from real blogging facilities for a few days, is all of a twitch and is thus going to abandon charity and launch into this letter. [I can't find it online, so you will have to trust my typing.]

Anthony Hilton misses the point (2 October)—a flat tax will not give us the fairer, better tax system he wants.


The trouble with idiots is that they usually fail to take into account the circumstances surrounding certain measures. The flat tax will not, by itself, give us a fairer tax system; however, it will give us a simpler tax system which is less expensive to administer (which I would consider to be "better"). It is the other measures surrounding the flat tax, such as the high Personal Tax Allowance (PTA) which will deliver fairer taxes.

Now, this is such a stunning contradiction that I can only assume that Mr Murphy's letter has, in fact, been edited badly. However, since the Letters Editor is an Old Etonian and mine was edited rather well, I choose not believe this. Thus, I have to assume that Mr Murphy wrote this shit himself. Which means that I will never hire taxresearch.org.uk, I can tell you.

(You might also consider, of course, that Estonia hasn't made a deliberate move to eliminate the self-employed as The Gobblin' King has done with IR35; thus, a far larger proportion of workers in Britain have effectively been forced into being "employees" and thus their returns are handled by their employer.)

Fuck me, you are a thick bastard, you really are.

Flat taxes provide more opportunity for the rich to avoid taxes because if they are to be effective they need to make all overseas income tax-free.


Sorry, Richard, but why? If you tie taxes to a person, as we already do, then their income is taxed. Now, we could well adopt the US approach, i.e. that no matter where someone is resident, then they pay US levels of tax, which would allow us to abolish the somewhat arcane tax residency laws, but that still does not render overseas earnings untaxed. Nor would our current system. Perhaps you would like to email me and justify your assertion? After all, you are the expert here.

And while they might cut overall tax rates for the rich, all credible calculations show they increase them for middle-income earners.


Richard, I am trying to remain patient, really I am, but over the last six months I have drawn attention to several models of flat tax, many of which are credible, that demonstrate that they do not increase taxes for middle earners. For fuck's sake, man, who the hell are you trying to kid? Or is The Adam Smith Institute not credible enough for you? Or, of course, UKIP's Flat Tax policy document shows precisely how flat tax, coupled with a high PTA, does, in fact, make everyone better off.

Look, I know that a simpler tax system is going to deprive you of a good part of your living and so you have a vested interest but, seriously, don't you think that you ought to declare this before you write to newspapers spouting bald, fucking lies? Yes, I am indeed calling you a liar and, for good measure, a stupid bastard.

What Shadow Chancellor George Osborne should be doing is introducing a general anti-avoidance principle of the kind used in Australia, making the tricks of accountants illegal overnight.


How, precisely? Perhaps you would like to elaborate? The point is that avoidance isn't illegal; to make something illegal, under our Common Law system, you have to define what it is, precisely, that is against the law. I know it's a bore, Richard, but the law is there to protect us against the state and the required precision is to ensure that the government has to draft good law. So, maybe you'd like to write here and tell us how, exactly, you would go about introducing a blanket law against tax avoidance—which is, by its very nature, entirely legal, as opposed to tax evasion which is illegal.

Otherwise, I shall be forced to conclude that you are an illiberal fuckwit, well suited to join our metaphorically jack-booted friends in the NuLabour government.

Secondly, he should stop money escaping the Revenue's reach by abolishing the UK's domicile rules and closing offshore tax havens which impose a massive cost on the Exchequer but were encouraged by successive generations of civil servants to avoid paying for our post-colonial obligations.


Really? So how does that work? But, you're the expert; I'll just have to take your word for it. But, yes, as I mentioned above, we could well adopt the US system; it would make the flat tax much easier to administrate.

If these reforms were implemented, the tax take would rise. The Tories could then be in the position to ask what level of public services the country needs and use any excess to fund tax reductions.


If you say so, Richard. And the chances of that actually happening are...?

Fucking zero. There are always more things for governments to spend our money on. In Scotland, we are just about to have the privilege of paying an extra £500m per annum to pay for a £1.3bn hole in the public sector's unfunded final salary pension funds. Aren't we lucky?

No, no; let us set up a system where the government taxes us less and then they can find savings by sacking administrators (and abolishing the final salary pensions that no one else can now get).

The thing is, Richard, if the rest of your letter wasn't such a massive collection of utter arse, then I'd have ore confidence in your solutions. But your ideas are, frankly, pathetic; continuing the status quo is completely counterproductive. Taxes should be low, simple and compulsory (my new mantra); whilst the flat tax will not achieve this on its own, it will go a lot further towards doing so than your, frankly, pathetic suggestions.

What's "fair" about extortion and being a state slave 40% of the time?

I've read some of the economically illiterate cobblers on that guys blog before.

One must ask the question posed by Mr Worstall, is this guy paying more to HMG than absolutely legally necessary ?

If not, he's a hypocrite.

I like flat tax; but it will reduce the overall tax take in the first few years. The next stage is to spell out where the cuts will come from.

By the way have you seen Polly's latest piece of Tory Scaremongering. It is so bad you can't even fisk it!