Passport photo "could cause offence"

I don't especially want to feed DK's anti-Muslim meme - me being such a cuddly, middle-of-the-road type - but this story actually has nothing to do with Muslims per se and everything to do with dhimmitude; and it had me shaking my head in utter disbelief. 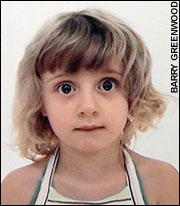 A five-year-old girl's passport application was rejected because her photograph showed her bare shoulders. Hannah Edwards's mother, Jane, was told that the exposed skin might be considered offensive in a Muslim country.
The photograph was taken at a photo-booth at a local post office for a family trip to the south of France. Because of the way the camera was set up, the picture came out showing Hannah's shoulders.
The family had it signed and presented it at a post office with the completed form but were told that it would not be accepted by the Passport Office. A woman behind the counter informed them that she was aware of at least two other cases where applications had been rejected because a person's shoulders were not covered.

This is an almost textbook example of the extremes to which our terror of "offending" other cultures has taken us. Like similar daft incidents in the past - Piglet figurines and posters for Christmas church services come to mind - the obsession with political correctness causes us to bend over backwards to accommodate the supposed sensitivities of minority cultures.
Two common themes; government is terrified of demanding any reciprocal "concessions" from the minorities in question, and so all this works in one direction only; and second, in the interests of fairness, it's worth pointing out that these incidents almost never involve any actual complaint from someone from the minority in question - indeed, when asked, leaders of the relevant religious or ethnic groups will not understand what all the fuss is about - but rather, emanate from the jobsworth overzealousness of an overpaid [taxpayer-funded] diversity officer with fuck-all to do with his time.

Spot on. Another example was Richard Latham's sculpture at the British Museum, which included Holy Books. I do think someone needs to complain before we decide whether or not we continue to offend them.

Not only is the passport office's position mind numbingly stupid, I think it's actually offensive to muslims.

As I understand it, the rationale behind the prohibition against women displaying bare shoulders is to prevent men from having naughty thoughts. This little girl is five years old.

Thus by inference the pc morons at the Home Office telling us that the sight of a pre-schooler's bare shoulders is likely to turn muslim men into frenzied sex maniacs?

I know that some arabian cultures accept marriage at ages earlier than we do, but I think if I was a muslim I'd be organising all my mates to go down and jump up and down outside the passport office waving Hezbollah flags about now.

Cartoons be buggered, call me a Goddamned kiddy fiddler and I'll rip your head off and shit in the hole before you can say "paediatrician".

Surely by the same standards it would be offensive to muslims for the passport office to ban photos of women wearing full burka.

Erm, I feel I must point out that you see Muslim girls of this age wearing vest tops in all of the Arab states. The girls don't need to cover up until they reach puberty.

DK is right: this is about fuckwit jobsworths who know fuck all about anything.

Yup, like the iglet ban, this is another case of over officious counter staff fuckcing up. The Passport Office wouldn't have rejected it, an idiot on the counter decided to do so in a local post office.

Nowt t'do with Home Office (unusual, something they haven't fucked up), and instead the fault of a lone employee. Piglet ban was similar, it was one manager in one department taking a single complaint about a different thing entirely far too seriously.

You need a passport photo for your child?

How to take your photo
With www.paspic.com you only need to take your photo with your face in the middle of the picture, on a plain off-white, cream or light grey background. Paspic will take care of the rest!
Easy Peasy!

Have a nice Day

I am Hannah Edwards, from this story. I would just like to say that the problem that my parents had was not with Muslims, but with the ignorant assumptions that the lady at the post office made. I feel this is expressed quite clearly in this article, but I would like to make it very clear that neither myself or my family members have any problem with Muslims.