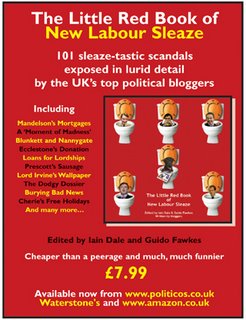 My Little Red Book of New Labour Sleaze arrived this morning, and I shall shortly be putting up a shelf in my loo to house it. It is a very nice little volume, which the ever-delicious-feeling matt lamination on the cover. Also, it's my first time in print, so I shall treasure it.

Order it at Politico's or even better, use the link to the left and earn me some money, courtesy of those nice people at Amazon.

In other news, I am going through to Glasgow this evening to see The Divine Comedy playing live—hoorah! And, for those of you who want to know, a review of their new album, which is out on 19th June, is up at Nightcap Syndication.