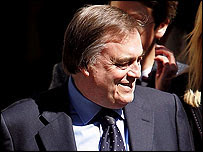 John "Two Jags, two shags, two lunches, two breakfasts, two teas, etc." Prescott: Johnnie learns of his exciting New Deal from Princess Toni; the deal is that he is out of work but, unusually, keeps his salaries, expenses, freebie homes and DPM status. Whether he keeps his wife is unknown at this time.

Via the estimable Gorse Fox amongst others, what the fuck is this shit?

It is "outrageous" John Prescott will keep his salary and grace-and-favour homes despite losing much of his workload, a Labour MP has said.
Geraldine Smith made the attack as Mr Prescott hung on as deputy prime minister but was stripped of his department in a Cabinet reshuffle.

Fellow Labour backbencher Kate Hoey said people would wonder "what on earth he is going to get paid for".

Well, quite. Nevertheless, I am sure that Toni has a plausible answer.

But No 10 says Mr Prescott has a heavy workload chairing Cabinet committees.

That's fucking pathetic: Prescott is such a total cunt that Blair cannot even be bothered to make up a decent excuse. What he should have said is: "John knows where the bodies are buried (and possibly in whose backbody my cock is buried when Cherie's away) so he gets to keep the lot. I just can't afford to have him actually running anything. I mean, come on, guys: do you want him running anything? How many more departments do you want him to arse up, eh?"

"It is outrageous that the deputy prime minister loses his department but keeps his position, his salary and the perks of the job," she said.

"Most people were astonished by this reshuffle.

"We have had excellent ministers like Jack Straw, and he is just side-lined, while people like John Prescott remain in their post without the responsibilities of office."

I don't know about Jack "Toni's Doormat" Straw being excellent—on, no, yes I do: he isn't—but I agree with the rest of it.

The Conservatives accused Mr Prescott of being a waste of public money.

Shadow chancellor George Osborne said: "John Prescott loses his department but keeps the trappings of office - including the car, the salary, and the two grace-and-favour homes.

"Add it all up, and the taxpayer is going to be paying more than a quarter of a million pounds a year. If you're looking for ways to cut waste in government, you can start with John Prescott."

He's not just a waste of money, he's a waste of fucking oxygen, the fat git. And skin. Just think how many handbags you could make out of Prescott! Oh, but let's start a Prescott Gooble bomb" "waste of money".*

But new Labour Chairwoman Hazel Blears said Mr Prescott had been planning for some time to give up his departmental responsibilities to concentrate on other issues.

Like what? Fucking his secretaries and groping air stewardesses? I assume that he won't be spending much time at home—what with his wife being there and all.

"The job that John Prescott will be doing, and actually has been doing for a long time now, will be chairing some pretty high-level committees...

We can only assume that he isn't good enough to chair either "high-level" or "very high-level" committees, because he's such a thick, uncultured arsehole.

... designed to try to make sure that policy right across government is focused on the things that matter to the public," she said.

Great: I'm looking forward to the following campaigns from NuLabour:

How does that Stinky Mac's ad go? Mmmm hhmm Mmmm, ah'm lurvin' it!


* Ooh, I've just realised that Prescott was born in the hole known as Prestatyn. That almost makes me feel sorry for him...
By Devil's Kitchen at May 08, 2006