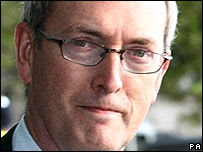 John Hutton: looks insufferably smug, and we are all still trying to figure out why.

Is it only your humble Devil who shudders in fear when he sees headlines like this?

To me, the words "huge" and "shake-up" are now pretty much synonymous with "larger than usual fuck-up". Still, maybe this won't be the usual fuck-up-fest that we all now expect from this bunch of shysters. So, where is the sting in the tail?

The work and pensions secretary has promised the biggest shake-up of UK pensions system since the creation of the welfare state in the 1940s.

Is it just me, or has this been promised before? I seem to remember someone else producing a report on pensions, and The Gobblin' King more or less telling him to roll it and ram it up his arse.

John Hutton confirmed he wanted to restore the link between pensions and earnings, as well as raise the pension age from 65.

Sorry, but for whom, exactly? John Hutton has, as far as I am aware, stuff-all control over prvate pension firms; the only thing that he can possibly affect is the state pension, and the pensions of those lovely public sector workers who consume our money and then strike because they will have to work 5 years less than the rest of us.

Now, I'm pretty fucking sure that, by the time I retire, there won't be a state pension (or I'll have to work until I'm 103 to qualify for it) so forgive me if I am a little more than massively underwhelmed by this announcement.

But he said the "number one problem" to resolve was how to encourage people to save more for retirement.

Well, one good way would be to take the 11% of their salary that is currently paid to the government in NICs, and instead pay it to private insurance and pension companies. In this way, the money might actually go towards providing healthcare and pensions rather than funding the ever-burgeoning wage and commensurate pension bills of corrupt politicians. Just a thought.

The long-awaited pensions White Paper will be released later this week.

"Lalalalalalalala, we're not listening. Hutton can stuff his Pension White Paper up his arse because the Treasury is going to do precisely what it wants, thank you very much. Cheers, John, nice job: now fuck off and die. Lalalalalalalalala..."