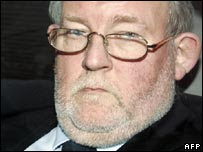 I bet his crotch smells appalling after a long day at the office; it's his wife I feel sorry for, gagging as she nestles her face against his pubes and takes his half-turgid penis down her throat. Come to think of it though, let's face it, it's really her fault for marrying him in the first place.

Regular—or even occasional—readers of The Kitchen will know that I think that Charles Clarke is a fucking cunt, and I have suggested a number of measures to curb his excesses, most of them involving his painful expiration: phrases such as "breathtaking arrogance", "deeply insecure", "fucking useless", "deeply unpleasant" coupled with epithets that have included "a sly cunt", "a total and utter cunt", "a cunt with teeth", "overweight bastard", "a shit-eating slug", "liar", "a shit so far in front of the first water that he practically counts as some new lifeform", "a fucking fat wanker who should go and put himself out of our misery", "an overweight, stubborn, thin-skinned, deeply insecure bully" and "the world's most eloquent argument against the existance of an intelligent designer" might possibly have conveyed the impression that I didn't rate the fat fuck too highly (although I couldn't string him up high enough).

The rancorous thug* is removing certain compensation for wrongful imprisonment.

Spending on compensation paid to those wrongly convicted of crimes is to be cut by £5m a year, Home Secretary Charles Clarke has announced.

Those who win their appeals at the first attempt will get no compensation. Others who have spent years in prison will see any pay-outs capped.

I have never, ever seen this before and I know Timmy to be possessed, as Mr E puts it, of an almost Zen-like calm; but the man has gone absolutely fucking postal.

And for what? To save 5 million a year? 5 fucking million? Out of 500 billion that he and his wastrel compadres are spending each year?

That is, 0.001% of public spending is going to be saved by not compensating those whose lives have been irretrievably fucked up by the actions of the State?

Have these people no shame?
...

Charles Clarke should be hung from the nearest lamp pole, assuming we can find one to bear the weight of the fat fucker, the assembled political parties forced to watch as he tap dances on air and happy children gambol at his feet.

Oh, and don't forget to beat him like a fucking pinata.

Anyone fancy sponsoring Charlie "fat fuck" Clarke the price of a trip to Cascais? Go on: he'll only need a one-way ticket...


UPDATE: Just been talking to The Curator, who pointed out that the word that most people seem to have bypassed is "innocent". These people are innocent; there's no guilt attached to them just because they were in court. They are fucking innocent; except, of course, in Clarke's brave new world there is no such thing as innocence. God I hate that man...

UPDATE 2: Classic comment from Mr E over at his place after I suggested that Clarke bullied his wife into performing nightly oral cock ablutions...

"In my opinion, you would be 'foolish' not to go down on me immediately. No one is forcing you, but your details will be recorded if you do not."

I am now cleaning coffee off my monitor...

I dare not ask what made you sit down and give sustained thought to the state of the Home Secretary's crotch. Perhaps Dr Crippen can prescribe you something.

But thank you. This is just the sort of thing I need to kick-start my diet after the Easter chocorgy.