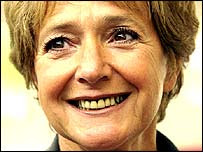 Margaret Hodge: "Lalalalalalala... I can't hear you or the screams of the children being ritually buggered in my care homes..."

Regular readers at The Kitchen will know that your humble Devil is no fan of Margaret "child abuse, what child abuse?" Hodge; so, before we proceed to the main nub of this little post, let's review her career as summarised by Wikipedia.

Margaret Hodge was born in Egypt as Margaret Oppenheimer, the daughter of a millionaire German Jewish high-Tory steel trader and his Austrian Jewish wife.[1] [2] During her 10 years as leader of Islington Council she earned the nickname of 'Enver Hodge', after the Albanian despot, Enver Hoxha ('Hoxha' is pronounced similarly to 'Hodge'.)

And so, already we see what a delightful woman she is...

In 2003 she was involved in a controversy about press coverage of a man [Demetrious Panton] who accused her of being ultimately responsible for abuse he suffered as a child in a home overseen by Mrs Hodge as leader of Islington Council. Following a media campaign conducted by several national newspapers calling for her to resign, she was further drawn into the controversy by responding to the man in question by letter and referring to him in it as 'extremely disturbed'.

As Private Eye readers will recall, she was actually approached by worried care home staff, effectively "whistleblowers", who warned her about systematic abuse in Islington care homes. Mrs Hodge refused to listen to the allegations and also refused to conduct an enquiry into abuse in the care homes.

She has been accused of failing to act, despite receiving warnings - an allegation she denies.
...

Mrs Hodge insists she has learned lessons from the scandals in Islington.
...

"She won't make a statement to the House of Commons. The only honourable course is for her to resign her position."

Obviously, the lessons that she learned were to cover everything up and, when the whole appalling situation comes out, to attempt to smear her accuser and to gag the news outlets reporting on her disgusting failure to act.

So, naturally, who better to be appointed Minister for Children than someone who had consistently and deliberately failed to protect those children under her charge? What a very typical NuLabour appointment that was; needless to say, the fact that she is "viewed as a strong supporter of Tony Blair" had absolutely stuff all to do with it.

Darling Margaret has, of course, won awards for her sterling work as a public servant.

Gosh, another one of those damn databases; what a thorn in the side of NuLabour they are. Well, it's not, of course, so much the databases as all of those dreadful groups whining about a right to privacy and all of that libertarian nonsense.

Of course, when it's not her that has to get her hands dirty, Margaret is very keen on the government getting involved in people's lives.

"For me it's not a question of whether we should intrude in family life, but how and when - and we have to constantly remain focused on our purpose: to strengthen and support families so they can enjoy their opportunities and help to provide opportunities for their children."

Well, Margaret, let me make a suggestion as to the "how" and the "when": how about when you are the leader of a council and you have been informed that there is ritual child abuse going on in care homes that are supposed to be in your charge? Just a wee suggestion for you, you know. And obviously the government should get involved in people's private lives because they are so much better at raising children than we are, naturally; and, obviously, the fragrant Margaret is exactly the kind of person that you'd want protecting your children, eh? Let's face it, the woman would probably have her strap-on cock plastic-balls deep in your child before you could say "can't you MPs leave us the fuck alone?"

And now it seems that darling Margaret is worried about the BNP gaining council seats in her constituency of Barking (and, frankly, she probably is).

White working class voters are being "tempted" by the British National Party as they feel Labour is not listening to their concerns, a minister has said.
...

She said the area's "difficult" change from a white area to a multi-racial community had caused some people to seek out "scapegoats".

Mrs Hodge told BBC Radio 4's The World This Weekend: "The political class as a whole is often frightened of engaging in the very difficult issues of race and...the BNP then exploits that and try and create out of a perception a reality which is not the reality of people's lives."

With all due respect Margaret, what would you—with your minister's salary (£70,000 or so?) and £99,382 expenses—know about "the reality of people's lives" exactly? Whether or not they really are being disadvantaged, the people of Barking think that they are, and that is all that the BNP need.

And what do the BNP say about this?

BNP spokesman Phil Edwards said: "People are being tempted by the BNP because Labour and the Tories don't have any inclination to debate the effect of mass immigration on communities in Britain."

Well, much as I hate to admit it (surprise though that will be to those who call me "racist"), he's right; why not check out Martin's blog for a daily blow-by-blow account of why we need a serious debate about immigration?

All of the main parties are so completely out of touch with the people that they claim to represent that no one wants to vote for them; yet many people want to vote for someone. And the BNP has done a very good job of connecting with voters on the doorstep, as Margaret points out.

Mrs Hodge told the paper she has been out campaigning two days a week in an attempt to counter the BNP efforts.

She has found that as many as eight out of 10 white families admit they are tempted to vote BNP.

"That's something we have never seen before, in all my years. Even when people voted BNP they used to be ashamed to vote BNP," she said.

It is time that the main parties actually looked at the concerns of their constituents because, at this point in time they have failed so comprehensively and totally that there is a very real danger that the BNP and other extremist parties will make significant gains. Besides, I want someone that I feel I can vote for...

Finally, it is time that Margaret "you failed them, you bitch" Hodge decided to do the decent thing and hang herself. And may the fate of the children that she abandoned weigh heavily on her soul...
By Devil's Kitchen at April 18, 2006

1. You think that the main parties need to pay attention to the concerns of their constituents or there is a very real danger of the BNP gaining more ground.

2. Margaret Hodge, a government minister, is the first politician to publicly state that the main parties need to pay more attention to the concerns of their constituents or there is a very real danger of the BNP gaining more ground.

3. Therefore you think that Margaret Hodge should hang herself.

How dare you apply logic to one of my posts...!

Sorry... my inner Vulcan just sort of burst out there for a moment...

Take a look at www.margarethodge.info