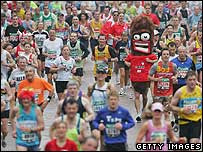 The London Marathon: what the fuck are these lunatics up to? Fucking their knees, that's what. And I bet that not one of them is running for Pay For Knee Operations On The NHS charity; but then, none of those damn charidee parachutists jump to pay for their injuries on the NHS either...

Your humble Devil is not a sporty person, he has never earned the epithet "Sporty Spice". "Saving Up For Gout In The Future Spice" possibly, as yet another empty port bottle—usually a tawny, but white if I can get it—disappears into the "definitely no recycling going on in this household" bin. But, sport, no.

Don't get me wrong: I quite enjoy playing the odd game of footie, or even cricket. I used to think that I wasn't too bad at tennis either (until my ex disabused me of that notion one sunny afternoon, sweeping the pill into the corner once again) and I definitely play a mean game of croquet (the game that dispproves that old aphorism, "the family that plays together stays together", as yet another furious argument about what the House Rules are exactly erupt in the Hellish household).

No, all I am saying is that long years of smoking and the comsumption of many thousands of pints of Britain's finest foaming has rendered my physique unable to cope with more than a couple of hours of vigorous exercise a year; my filthy temper renders my involvement in anything competitive unwise; and my utter lack of enjoyment of exercise for its own sake means that I simply cannot be bothered to participate in anything that doesn't actually have a point to it.

That point may, in fact, be beating Gabriel's scratch side by ten goals to nil, or humiliating one of my lesser devils with a racquet, but it absolutely does not include jogging a mile around the Meadows first thing in the morning, storing up trouble for the future by buggering the cartilege in my knee whilst doing so.

So you can imagine the enthusiasm with which I welcome the idea of running 26 fucking miles around one of the most polluted cities in the world, dressed as a fucking chicken: I mean, seriously, what is the fucking point? Why on earth would one participate in such a thing? All I can think is that the thousands of participators are, quite simply, a massive illustration of the failure of Care In The Community. Each and every one of them should be banged up in a loony bin, and drugged to the eyeballs, until the dribble collects in their crotch.

The only real entertainment, as Mr Angry amusingly points out, is the hope that one may see some kind of incident; usually this will involve a massive coronary and a paramedic crash team. With any luck, this medical emergency will also involve a C-List celeb. It has to be better than trying to interview the bastards.

“How’re you finding it?”, asks the commentator momentarily jogging alongside the pop-star/presenter/wannabe.

“Hard work, but we’re doing a lot of good for [insert charity of your choice here], and that keeps me going! See you at the end!”, replies the C-lister.

This is such a load of sanctimonious old bullshit that I can barely contain my loathing. Anyone who has ever done a marathon will know full well that the only thing the attention-grabber really wanted to say to that commentator was;

“Fuck off will you, I think I’m having a heart attack and I need a shit. If I didn’t think it’d harm my [record sales/acting career/chances on Big Brother] I’d have fucking dropped out miles back. I’m in fucking agony and if you don’t get that fucking microphone out of my face I’m going to shove it up your fucking hoop!”

Croquet, eh? Damn public schoolboys. Mind you, it's 12 years since I swung a mallet in anger and I'd beat you with one arm tied behind my back.

On the subject of the Marathon, I see Jade Goody's wobble round half the course raised all of £355...

... with one arm tied behind my back.

That could be arranged...

I'll bring the flannels and the gin.