John gets his johnson out 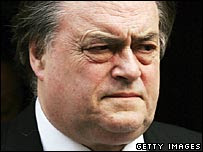 John Prescott: was the woman mad? Look at that fat, ugly, vicious-looking face; where is the attraction? It would be a little like fucking a sealion, I should imagine: a particularly grumpy, arrogant, inarticulate northern sealion. And I wouldn't have thought that it was his eloquence that got her into bed...

Via Allan, the hilarious and yet mildly bizarre news that John Prescott has admitted to having an affair with—and what a surprise this is—one of his secretaries.

Deputy Prime Minister John Prescott has confessed to having had an affair with one of his secretaries.

The MP for Hull East said he regretted the relationship with Tracey Temple, 43, which had ended "some time ago".

"I have discussed this fully with my wife Pauline who is devastated. I would be grateful if [we] can get on with our lives together," a statement said.

I think that what John meant to say was that he regretted being the relationship with Tracey Temple being found out.

Downing Street said it was a "private matter" and that Mr Prescott, 67, had the full backing of Tony Blair.

I'd start packing your bags now, John, if i were you. I don't think that the PM thinks that you are an indisposable asset: more of a talentless liability.

That was a message repeated by Home Secretary Charles Clarke when he appeared on BBC Radio 4's Today programme.

Yes, well, the fat, jug-eared cunt also has Blair's full backing, apparently: I wouldn't care for his chances either, except that Blair is swiftly runninng out of friends. Do I detect the hand of a certain Cyclopean Chancellor in all of this...?

Mr Prescott and Ms Temple started meeting in secret at his Whitehall flat after a two-year relationship began at an office party in 2002, the Daily Mirror reported.

The pair began working together when Ms Temple was appointed as Mr Prescott's assistant private secretary, responsible for organising his diary, said the paper.

She had reportedly previously worked as a personal diary secretary for former Northern Ireland Secretary Mo Mowlam, who died of cancer last year.

I don't suppose that Ms Temple carries some sort of cancer-giving curse with her, does she...?

Ms Temple's boyfriend, lorry driver Barrie Williams, 46, told the Daily Mirror: "I just can't believe that my darling Tracey has been sleeping with John Prescott behind my back.

Ha! Yes, it must be humiliating enough to find that your fiance is sleeping with another man: to find out that that man is John Prescott must absolutely destroy any self-esteem that you once had.

"How dare he split up my relationship with the woman I'd planned to marry?"

Hmmm, well, Barry, I hate to point this out, but it does take two to tango. Or to fuck each other senseless. Perhaps Prescott promised her one these new houses that he's building all over the place...

Mr Williams, of Bordon, Hants, said Ms Temple asked him to marry her just two days after she began a relationship with Mr Prescott.

"I'm just glad we hadn't got round to tying the knot," he said.

I bet you are. Still, at least you were close enough to be able to make some money talking to the Daily Mirror, eh?

Still, I am very grateful that someone leaked this so that I can highlight the moral bankruptcy—personal and political—of NuLabour once again.
By Devil's Kitchen at April 26, 2006

First thing I thought when hearing this this morning was "Please no. Prescott backing the beast with two backs is not a mental image I want, ever" then it was rather like ChickYog "what are they trying to cover up?" A nice little sex scaddle does come at rather a convient time what with Clarke having made such an unmittigated balls up of forgetting to deport those thousand foreign prisoners, Despite there being warning in 2002 and 2004 accoring to the radio this morning. However he does see to have taken your advice and offered to resign. So he'll be back in cabinet in a couple of weeks.

God, can you imagine how smelly his crotch would be...? Sitting in his office, sweating even in the middle of winter, the excreta dribbling down his heaving man-tits, trickling and pooling in his crunchy pubes.

Ew on so many different levels...

And seriously, why would the boyfriend say "my darling" in his quote. Dude, your woman was screwing a really fat ugly guy behind your back, you're BETTER OFF.

How must the boyfriend be feeling at the moment? sitting at home staring dejectedly at the TV, pint of vodka in one hand, bottle of pills in the other, thinking 'she dumped me for that'.

So Prescott was doing to her what he has been doing to the taxpayers of the UK for years...But seriously how could anyone fuck Prescott?

The thought of the fat cunt talking dirty has got me in tears. Can you imagine the sheer inarticulateness.