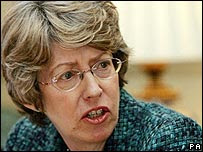 Patricia Hewitt: living on a different planet from the rest of us; this woman is so far beyond clueless that she qualifies as a fucking mental cripple. She is a walking advert for Disability Allowance.

It seems that the sad case of Patricia Hewitt's "mental fucking retardation" is fated not to have a happy ending. Unfortunately, Pat's terminal stupity has developed still further, our reporter can reveal.

Doctors are still at a loss to isolate the cause of Pat's fucking uselessness, but are able to confirm that the mental fucking retardation has led to Pat becoming totally divorced from reality.

"It's really tragic," one consultant told us, this evening: "Pat seems to be living in a different world. Whilst the rest of us know that the NHS is completely screwed, everything is just dandy in Pat's world. It's very, very sad."

Alarm bells were sounded when Pat today asserted that the NHS was having its best year ever.

Despite huge job losses and mounting financial problems, the NHS is enjoying "its best year ever" according to Health Secretary Patricia Hewitt.

The service faces a financial deficit of up to £800m and some 7,000 job losses have already been confirmed.

And yet still the National Health Service is, in fact, having the best year in its 58 year history. If this is the best year in the history of the NHS then what—in the name of all that is unholy (Tony Blair)—the fucking hell happened in its worst year?

Given that the NHS is patently fucked, what does Hewitt think has made this year so good?

Mrs Hewitt said: "We have just come through one of the coldest winters for decades and we haven't had any of the winter bed crises."

She said the job cuts - which latest estimates suggest could rise to 13,000 - were in many cases allowing the service to operate more efficiently.

Oh, yes; these are those ones that mean that hospitals can cut 1,000 staff and then maintain that this will not affect patient care. As I pointed out before, if that is the case, then why the hell were those staff hired in the first place?

She said the government had delivered on its promise that the maximum waiting time would be six months for operations such as hip replacements.

"In the bad old days", she said, the waiting times would have been closer to two years.

The health secretary insisted she was not "complacent" about the cash problems, saying she was "determined" to sort them out before they began to threaten patient care.

Pat, some people—the doctors mainly—would say that it already is threatening patient care: do you not read Doctor Crippen? Or even glance at the loony Left newspapers?

Critics have claimed that NHS managers have been spending too much on staff wages, paying too high prices for some drugs and wasting cash by mismanaging cost-cutting initiatives.

Well, "critics" would be right; that is precisely what has happened.

Unless, of course, you happen to be a mental cripple like Hewitt; it must be some form of head cancer. Surely no one could see things so utterly differently to everybody else without having something physiologically wrong with their brain. There is only one option.

My local hospital is called Chase Farm Hospital. It is where two of my children were born 28 and 24 years ago. Now, I have been voting in elections for as long as I have been able to vote, but I never thought that one day I would be voting for a candidate with the words "save Chase Farm Hospital" next to their name. But that is what I will be doing on May 4th. Our local hospital is going to lose its Accident & Emergency Department, Maternity Unit and some other facilities. I don't even know how I will get to the next nearest hospital if I need to - it is miles and miles away, through heavy traffic for most of the day. And its not just me, of course, but thousands and thousands of us. I really do wonder what New Labour are playing at, saying that this is the NHS best year ever; are they trying to wind us up? Do they hate us that much? Somebody help us for God's sake! We are being governed by a bunch of sadistic bastards.

Give the old fella a rest you ranting twat.

All you do is moan and whinge! Get a hold of yourself, do your crappy job (whateva it is) and shut up!

You must be a very sad person to be quoting a politician and ripping her statements blow by blow from behind the anonymity of a computer screen. I bet you couldnt say all this shit to her face you coward! This is just pathetic. Get off your moaning arse and do something to change your sorry god-foresaken petty existance, you utter utter fool.

To be fair, Anonymous, he is right.

I also like the irony of complaing about how anonymous the original post is, yet you don't leave your name...

PS- have only found out this bog today, but really like it! Have linked to it on my blog.

People wake up! Why do people in UK put up with being slaves of Rothschilds - the mass murdering war mongers; the rebuilders of the Tower of Babylon/Solomon's Temple (currently under construction in Israel)? Don't let the soulless whores of Babylon, Satan's minions & freemasons destroy our catholic civilisation. And to the Zionist scum incorporated: be warned - people are onto you. Know that your NWO will not be imposed on us.