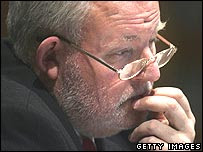 Those long-time readers who read my first Charles Clarke demolition might have realised that I was attempting to apply a rather more rational assessment of Clarke's character than is often my wont. I wanted to get to the nub of why this man was such a total cunt, and one of the things that I pointed out, ad nauseam, was that was incompetent: after all, the only Bills on which this government have been voted down were done so on Clarke's watch.

But the real insult is that Clarke is so utterly fucking useless; if I could offer some advice to the Safety Elephant, it would be, "shut your fucking trap"...

Charles Clarke: the world's most eloquent argument against the existance of an intelligent designer...

Politically, the man is useless; now, it seems like he is useless as as an administrator too.

The home secretary has said he will not resign after it emerged 1,023 foreign prisoners had been freed without being considered for deportation.

Charles Clarke said he did not know where most of the people, who include three murderers and nine rapists, were.

Ah, wonderful: so, thanks to the incompetence of those under Clarke's jurisdiction, there are over a thousand extra criminals roaming our streets.

"Now there are sufficient resources, and we are confident no further convicted foreign nationals will be released in this way."

Do you blieve them? I don't.

Mr Clarke had said the failure leading to the 1,023 releases was "deeply regrettable" and conceded that people would be angered by the oversight.

Well, as usual, that is wonderfully insightful of him. Like my colleagues below, I am a little more that "angered"; I am fucking livid.

Among the offenders, five had been convicted of committing sex offences on children, seven had served time for other sex offences, 57 for violent offences and two for manslaughter.

There were also 41 burglars, 20 drug importers, 54 convicted of assault and 27 of indecent assault.

The Home Office said it did not have full details of offences committed by more than 100 of the criminals...

Wait a second: the Home Office doesn't even know what they've been convicted for?! What the fuck is going on?

... but 237 were failed asylum seekers and 54 were still having their asylum applications considered.

No, no, and thrice no! If they have committed a crime in this country, there is no consideration of their asylum applications: they are deported. All asylum considerations should be ceased immediately and the criminals deported. I'm sorry, but we don't have the resources, either financially or spiritually, to deal with hundreds of foreign pieces of shit as well as our own. So, why the fuck are these applications still being "considered"?

Need we point out that they are serving these sentences at our expense? Each prisoner costs about £32,500 per annum, so those 870 foreign criminals will cost us at least £28.3m this year alone. Hell!—what's £28m these days, eh? How many hip operations would that pay for? How many frontline nurses (1,000 minimum)?

However, Shadow Home Secretary David Davis accused Mr Clarke of trying to "smuggle out" the news rather than face MPs' questions.

"At the end of the day it's not good enough to blame officials, frankly it is a issue which affects the safety of the British public," he said.

Well, exactly; and we all know how keen Charles Clarke is to protect us all. Has that not been his rationale for ID Cards? For the draconian Anti-Terror Legislation? For the abolition of habeas corpus? Do you not remember the Tony and Charles double-act, ballsing on about how the greatest right of the public was that of being not being killed? Ach, you know: I simply cannot be bothered; there really is little to say but add my voice to the ever-swelling chorus...

Resign. Now. You are a hideous, weaselling cunt, Clarke: fuck off and die.
By Devil's Kitchen at April 26, 2006

For once your swearwords are totally justified. What can I say about this. This is a disaster for all of us. Labour are certainly doing their best at the moment to lose badly in May.

Actually, I think that it is his least appalling transgression, but then you'll probably have guessed that...

if any one of those 1,023 turn out to be linked to terrorists you can say bye-bye to Nu Labour.


strange thing is - i have a gut feeling that this will be the case, and that this scandal will be far far worse that it first appears to be.