It's been two weeks now since anyone heard from Jack Idema, Brent Bennett or Ed Caraballo, the three Americans illegally imprisoned in Afghanistan. Clearly, this is a worrying situation -- Those of us who've campaigned for Jack's release have never been out of touch with him for so long, and the silence is beginning to seem ominous.

Though this isn't to say that Jack and his men are the only people affected by fallout from the terrorist riots at Pulacharke prison:

A car bombing in the capital targeted Sibghatullah Mujaddedi, a Muslim cleric who briefly served as president in 1992. He now heads the upper house of parliament and leads a commission encouraging Taliban fighters to reconcile with the government.
Mujaddedi escaped with burns to his hands and face, but two bystanders — a girl on her way to school and a man on a motorbike — were killed. Two attackers who drove the explosives-laden station wagon into the convoy also died.
"The explosion was very strong. For a while I couldn't see anything. I was in the front seat of my car. I saw a big fire came toward me," the white-bearded Mujaddedi told a news conference a few hours later.
His hands were wrapped in bandages — burned when he raised them to protect his face from the blast.
The bloodstained road was littered with parts of the attackers' car. 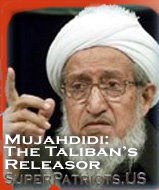 Now, before anyone begins feeling too much sympathy for the injured Mujaddedi, it's worth bearing in mind that in his capacity as Afghanistan's 'Chief of Peace and Amnesty' he's responsible for releasing more Taliban and al-Qaeda terrorists back onto the streets than anyone else. Ever.

It's for this reason that both Mujaddedi and his boss, President Karzai, are faced with the problem of figuring out precisely who would want to blow up the Mullah. Not al-Q, obviously. No one seriously thinks they'd attempt to murder the man who's working harder than anyone else to release their compatriots from Afghan prisons. So that leaves -- Who?

Mujaddedi directly accused Pakistan's Inter-Services Intelligence (ISI) agency for the bombing. He offered no proof.
"We have got information that ISI of Pakistan has launched a plan to kill me," he said.

... So Mujaddedi thinks the Pakistani secret service tried to murder him with a suicide bomb? Well, anything's possible ... Although it is, perhaps, worth bearing in mind that sticking Pakistan with the blame would help Mujaddedi out no end with another of his problems -- He's currently under investigation by his own Parliament for treason on the grounds that he is, himself, a Pakistani agent.

Is it credible that Pakistan would try to murder one of its own, most highly-placed agents? If not, then who, precisely, might Mujaddedi's would-be assassin have been?

Hey stupid, did you ever think it was a brother of a female inmate that was raped and beaten by the terrorist hostage takers that you gave amnesty to? Right folks, no one is talking about the rape of 80 women prisoners because it would be instantaneous civil war in Afghanistan and Karzai would be hanging in Sharanow Park like Dr. Najebullah (another "foreign" president but for the Soviets). Afghans don't like you to look at their women (hence the Burhkas) no less rape them.

This is, of course, the very mess that men like Jack Idema and the Northern Alliance were desperately trying to prevent Afghanistan descending into.

Back in 2001, the Taliban-era was over and the Afghan people were free. All that remained was the work of rounding up and imprisoning the few head-hackers who'd avoided capture as Northern Alliance and U.S./British Special Forces took control of the country.

Then, of course, we turned Afghanistan over to the Karzai-State Department alliance, who chose to pursue a disastrous policy of appeasement with terrorists. Jack Idema was one of the first casualties of this, as evidenced by the wording of the 'wanted' posters the FBI put-out prior to his initial arrest:

Approach With Force
Idema is well connected with the Afghan society, and has dealings with key military, political and local authority figures. He has been working in Afghanistan for three years, and has travelled extensively within the country. Idema is wanted by the FBI. He is known to travel with large and heavily armed soldiers from the illegal Northern Alliance. 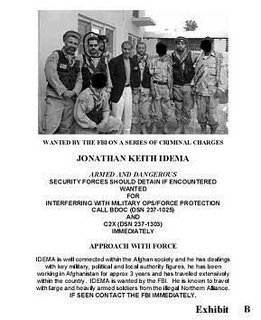 The 'illegal' Northern Alliance were, in fact, the men who risked their lives fighting to free Afghanistan from the clutches of the Taliban. Yet, by the summer of 2004, they'd been pushed to one side by the State Department, along with soldiers like Idema who stuck around to finish the job they'd started in 2001.

Fast-forward two more years, and today we can see where these policies have led: Most Taliban and al-Qaeda terrorists are back on the streets, enabled by men like Mujaddedi, whose corruption is so complete that he finds himself under attack by an entirely new form of terrorist -- Ordinary Afghans radicalised, not by Western 'aggression', or Abu Ghraib, or Israel, but by the failings of their own President to punish Islamofascists for committing one of the largest gang-rapes in history. Truly, we are snatching defeat from the jaws of victory. 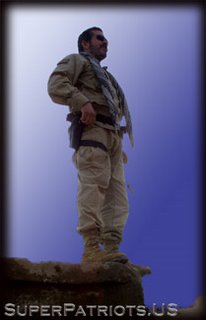