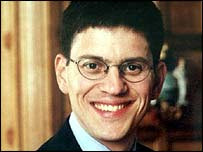 David Miliband: gets the "special" bus to work. But don't mock him; that would be cruel. But do watch him trying to eat an ice-cream; now that's hilarious...

Well, we all knew that this day would come: Labour plan to cancel elections. To be sure, it's only local elections today, but tomorrow...? Naturally, David "We Aren't Allowed To Call Them Spastics Anymore But We're Still Thinking It" Miliband denies that he ever said any of this. He's a NuLabour minister: anyone believe him?

Whitehall officials have told council chiefs they are considering cancelling the May 2007 polls because of possible plans for a local government shake-up.

I mean, I should be surprised, outraged. I'm not. I'm not surprised because NuLabour are fascists, and I'm not outraged because local elections are merely a case of voting for the least corrupt bunch of bastards. And, believe me, I find that that's a difficult enough choice.

Minister David Miliband says there has been no decision on council reform and he intends for the polls to go ahead.

But Conservatives and Lib Dems say Labour would benefit from avoiding local polls as Tony Blair prepares to step down and hand power to Gordon Brown.

I have no doubt that it would help NuLabour immensely, although the rest of us are still fucked. We will merely exchange a lying, mendacious, deceitful, self-delusional, shit-faced ring-licker for an incompetent, economically-illiterate, joyless Scots cunt. We must be one of the few countries in the world who know that their next leader is going to be even worse than the current one.

Fucking piss-flaps. Read the rest of the article: it's so depressing that I feel like slitting Gordon's wrists in a warm bath.

UPDATE: Like the improv game, it just gets worse...

I was wondering how long it would take. I guess my only surprise is that it has been this long...

Just thought I'd point out that amongst the thing that could be passed by Ministerial edict if this law gets on the statute books are...

I'm sure you'll love that!

I saw that. I'm working up to a real rage on that one: I'm just letting it simmer for a day or two.