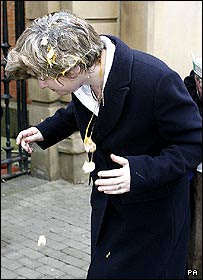 Via Nosemonkey, the joy of Ruth Kelly being hit by an egg whilst going to give evidence against a man accused of throwing an egg at her.

Of course, I share NM's view that this is a deeply childish and irresponsible act, and that the culprit should be made to pay Ruth's dry-cleaning bill.

Police arrested a 44-year-old man on suspicion of a public order offence and witness intimidation.

"Witness intimidation"? No doubt they arrested him under the Prevention of Terrorism Act too.

[Ruth Kelly] said: "This is just one of those things that comes with being a politician."

Well, that's very sporting of her; one assumes that she will not be pressing charges then, eh?
By Devil's Kitchen at February 06, 2006

With all the doom and gloom at the moment, at least that made me smile.