The unreliability of polls and the appeal of baldness 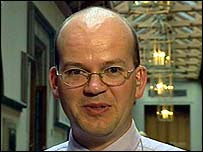 Mark Ballard: Rumour has it that his massive, reflective noggin can be seen from space.

Again, I'm a little late on this one, but it appears that the man Ballard's poll was a clever ruse to lure Boris's supporters into assuming that the vote was already won! How devious can you get?

Thus it has transpired that, despite a massive pictoral spread on Boris's antics in Student, Ballard won the rectoral election.

Your humble Devil happened to be wandering around the Potterow Union a little while ago, and saw Boy Ballard's posters up everywhere. They contained—I think you will agree—this most amusing joke.

God made only a few perfect heads. The rest he covered with hair.

However, I failed to see any posters advertising Mr Ballard's policies, or his advantages over other candidates.

It seems that—like a horde of paedophiles—the students of Edinburgh University have elected to take the hairless cunt*.


* This entire post was written simply so that I could make that "joke". No, I'm not ashamed. But the bit about Ballard's posters is entirely true. Vote for me because I'm bald must be one of the more innovative electoral slogans of recent years**.