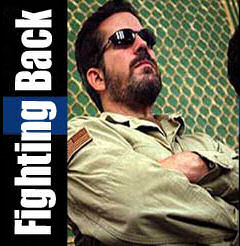 Every time I write about the plight of illegally-imprisoned U.S. Special Forces soldier Jack Idema, I take pains to stress the fact that he's a highly professional soldier with a talent for rooting out and either capturing or killing the kind of people who would do us harm. Here's Jack, speaking in a radio interview he gave from Pulachake prison earlier this year:

I flew my guys in. We flew into Afghanistan, and we met with the Northern Alliance. And I said, you guys know you’re not going to get our support anymore, but I’m here to tell you you roll with me and we’ll get the guy. And so they did. I met with the top core commanders, which are the top 9 department of defense guys in Afghanistan, and we got carte blanche to do whatever I had to do because I had a history with these guys. 40 some days later I had Gulumsaki in custody. Gulumsaki gave up the rest of the terrorist bomb cell. Within 5 days after getting Gulumsaki, I had about 95% of the cell. I had the explosives, I had the plans to blow up Bagram –they were going to drive fuel trucks into the barracks at Bagram aiforce base and kill a couple thousand American soldiers. I had their bomb plans to kill Qanooni who was the main opponent to Karzai and the leader now since Massoud died to the Northern Alliance. And I had the plans to kill Marshal Fahim the minister of defense, and all the other guys that were the top allies with the United States. All but two in custody.

The real interest this passage holds, however, isn't so much in Jack's successful counter-terrorism operations, but the name of one of the men he saved.

I'm talking about Northern Alliance leader Yunis Qanooni, who became Afghanistan's Prime Minister after last year's elections. Qanooni's ascension to the upper ranks of Afghan politics will, it's to be hoped, have a major impact on the Idema case.

See, Qanooni is a true Afghan patriot and a fighter through and through. Unlike Karzai, whose interim government has worked hard to integrate 'ex'-Taliban crazies into the new Afghanistan (unsurprising, perhaps, since Karzai, himself, once supported the Taliban), PM Qanooni is Northern Alliance, and has spent his whole life fighting against the fanatics threatening to ruin his country. Put simply, Qanooni is the kind of ally that we need on our side in the WoT.

More to the point of this blogburst, though, he's a man who owes his life to Jack Idema. Judging by events in the Afghan Parliament this weekend, it looks as though this is a debt Qanooni intends to repay.

On Saturday, the following three people were hauled in front of ministers in order to answer for their actions:

This is good news, but something even better happened the following day:

In a surprise announcement, the new Parliament of Afghanistan announced the formation of 18 commissions which will investigate illegal and corrupts government acts, security failures of the Karzai government over the last 4 years. The FIRST Commission empanelled is the JUSTICE COMMISSION, which will investigate abuses of justice and terrorism. Amrullah Saleh, judges, and Ministers will explain their actions in various selected cases.

It doesn't take a great deal of thought to work out that one of the 'abuses of justice' Qanooni's Commission will be looking at will be that of Jack Idema's illegal imprisonment. 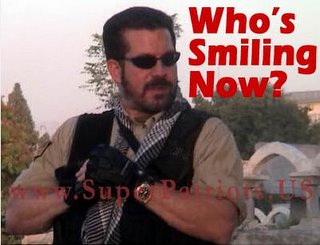 For the first time in months, it really is beginning to seem as though the good guys are close to winning this fight.

So, in the meantime, what can we do? Well, anyone reading this with their own blog can sign up for the weekly Free Jack Idema Blogburst by emailing Cao or Rottweiler Puppy for details. I'd urge everyone to do this, as we're still terribly short on takers. If you want to know more about the story, Cao's Blog has a large section devoted to Jack Idema. There's also a timeline here, and, of course, a huge amount of information is available over at SuperPatriots, without whose work none of us would have learned about Jack's story.
Finally, PLEASE NOTE: The SuperPatriots and Jack images on this site are used with WRITTEN COPYRIGHT PERMISSION and any use by any third party is subject to legal action by SuperPatriots.US

i hadn't even heard of this guy