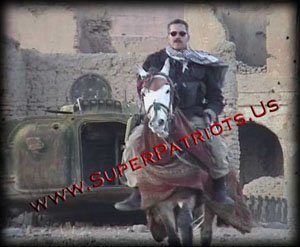 Last week, I talked about the way in which the September 2004 trial which landed U.S. Special Forces soldier Jack Idema and his men in prison was actually conducted by the very terrorists he'd spent three years hunting down.
But there's another side to the story of how Jack, Brent and Ed wound up in the infamous Pulacharke prison, and this involves elements within FBI and U.S. State Department, both of which have done everything within their power to hinder Jack Idema's efforts to gain his freedom.

Idema's problems, as those following this story know, appear to stem from his arrest of a senior Afghan judge, Sidiq, in July 2004. At this point in time, Jack was working with the Northern Alliance, operating a safe house where terror suspects could be held for interrogation prior to transfer to U.S. authorities. (There were fifty such safe houses in operation in Afghanistan, and their existence was not a secret from either the U.S. or Afghan authorities.) Although Idema knew the arrest of Sidiq might raise some eyebrows, he had good reason for believing the judge was a high-value suspect -- At the time of the arrest, Sidiq was found to be in possession of the following items:Unfortunately for Idema, the arrest of Judge Sidiq seems to have prompted the Afghan interim government to move against Jack and his men. Sidiq was, after all, an important man, and his detention perhaps alarmed not only those 'ex'-Taliban who were now working with the interim government, but also those sections of the FBI and State Department who still cling to myths like 'containment' and 'realpolitik'.
Idema, it should go without saying, is very much the sort of man who believes that terrorists cannot be appeased or given settlements -- They must, he says, be captured or killed. This difference of opinion came to a head in the following way:

Instead of a "friendly meeting" the men were arrested at Kabul NDS Headquarters and turned over to former Taliban officials at NDS. When first "arrested," the men were placed in the NDS' underground torture chamber where Jack and Zorro were subjected to beatings until they were unconscious. Jack sustained a broken sternum, torn rotator cuffs, both eyes had detached retinas, etc. Major Ezmerai was electrocuted for days, and the screams could be heard throughout NDS. Syhail and Sherzai were beaten, threatened, and Sherzai finally drugged when he refused to sign a statement against Jack. Bennett was interrogated relentlessly, and threatened with death repeatedly shown a knife and told his ears and nose would be cut off. (To date Bennett has lost 8 teeth because of those beatings.) The torture was with the full knowledge and sanction of the FBI who were directing it, using the Afghans as proxies. FBI agents were at some points laughing about it in the hallway.

And yes, you read that correctly. After the arrest of Idema and his team, the FBI assisted 'former' Taliban guards in torturing American citizens and the Northern Alliance soldiers who fought with us to liberate Afghanistan.
The FBI's involvement didn't stop there:

On or about this time, NDS, acting with agents of the FBI [Unnamed Agents 2 & 3], and possibly Ingram [more on her later] herself, removed Bennett's and Idema's dog tags, removed the their Geneva Convention Identity Cards, and removed Idema and Bennett's U.S. passports. The FBI also removed crucial exculpatory evidence from NDS headquarters; including approximately 50 rolls of 35mm film, 200 videotapes, and 500 documents, many of which were official documents which were evidence of actual innocence.

This process of removing evidence of Idema's innocence continued even after the initial trial -- When Jack and his men were granted leave to appeal their sentences, more evidence was disappeared by the FBI.

Then there's the U.S. State Department, who have acted in a similarly illegal fashion throughout Idema's imprisonment:

Sandra Ingram, Acting US Consul, not only refused to acknowledge Idema's assertion [of his POW status], she refused to pass his request on to the appropriate authorities, and refused to provide him with a copy of the Geneva Conventions as required by law. Idema also asserted their POW status and right to protection to NDS, the FBI, and various Karzai officials. During a subsequent visit by Ingram, Idema put his request in writing and demanded she make an entry in her Embassy notebook (Ingram refused to sign a receipt for Idema's POW protected status request). Further, Ingram refused to forward this request to the Red Cross, stating her DOS bosses "ordered" her not to.

This sort of behaviour continues today, with U.S. authorities refusing to relay mail to Idema, Brent and Ed, and even going so far as to deny them access to food parcels, clean drinking water and medical supplies.

Why? There are two reasons:It should go without saying that this is a shameful way for a Green Beret to be treated. After all, while the FBI and State Department in Afghanistan were playing politics, deciding on which Islamofascists it would be useful in the short term to ally themselves with, Jack was on a very different kind of mission. In his own words:

You can't fight terrorists with law enforcement and prosecution, Clinton tried that for eight years. You can't do it, they are animals– they are not human, just ask the families that lost their loved ones on 9/11. When the terrorists capture us they cut off our heads on television. When we capture them they complain that we don't let them p*ss for twelve hours. Well, sorry about that motherf*cker, you were about to drive explosive rigged gas tankers into Bagram and kill 500 American soldiers in a ball of flames. You should be glad I didn't defenestrate you. I believe that real Americans want real counter-terrorist operations, not bullsh*t press junkets and canned PR stories from PAOs that shot a gun once in their life on the basic training qualification range. I didn't start this f*cking war, not the one with bin laden, nor the one with the press, they started it, but I will finish it, or die in the process.

Anyone reading this with their own blog can sign up for the weekly Free Jack Idema Blogburst by emailing Cao or Rottweiler Puppy for details. I'd urge everyone to do this, as we're still terribly short on takers. If you want to know more about the story, Cao's Blog has a large section devoted to Jack Idema. There's also a timeline here, and, of course, a huge amount of information is available over at SuperPatriots, without whose work none of us would have learned about Jack's story.