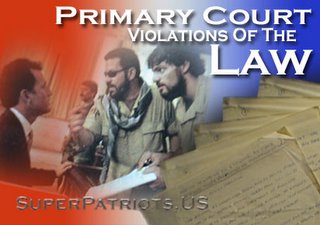 One aspect of the case of illegally-imprisoned Special Forces soldier Jack Idema that I've stressed time and again is that the first 'trial', at which Jack, Brent and Ed were sentenced to between eight and ten years in prison, was a complete travesty.
Of course, given the effeminate shrieking from human rights hustlers that accompanies even the slightest deviation from due process, some people might conclude that Idema and his men received a fair enough hearing, and that a kind of rough justice was done. This was certainly the impression MSM were keen to convey in their coverage of the trial.
Here's the BBC, who seemed to find it all rather amusing:

There is no doubt that some hearings descended into almost comical chaos, with witnesses having stand-up rows with Idema and the other Americans. And the prosecution seemed to base most of its case on accusation rather than evidence.
Translation was another problem - some of those chosen were not up to what was a difficult job.

... So what's it to be? The travesty the Free Jack campaign claim, or the somewhat rowdy, but basically sound, trial MSM were witness to?

Well, a good place to begin putting our side of the story is with the trial judge, 'former' Taliban member Abdul Baset Bakhtyari:

The original motion, like all motions filed, was ignored by Bakhtyari, who claimed the Interim Criminal Code, was merely a guideline, not really law, and that the laws of his former Taliban government would be applicable.

That's not really a good start, is it? Because, as a generally-accepted rule, judges don't get to choose which legal system they're going to try a case under. More to the point, since Idema and his men had spent the preceding three years hunting, capturing and killing members of the Taliban, it seems almost laughable to suggest that Bakhtyari could have been viewed as even remotely qualified to preside over the case. The phrase 'conflict of interest' doesn't even begin to describe this situation.

So much for the judge. What about the prosecutor, Abdul Fatah? After all, it was his job to assemble and present the case against Idema and his men -- Surely if this had been done in a fair and even-handed manner, Judge Bakhtyari's scope for mischief would have been severely curtailed?
Well, some hope. Prosecutor Fatah, you see, was an ex-KGB man, who'd worked for the Soviets during their occupation of Afghanistan. Here's an example of how he conducted the case against Jack and his men:

Then Fatah would pass the note up to prosecutor Dawari, who would then walk right up to the Judge's bench and hand it to him while Jack, or later, one of the attorneys, would be talking. Bakhtyari would then read the note, and make some wild ruling. Regardless of how many times the defense objected or yelled about the secret communications, Bakhtyari would just ignore the complaint.

... And so much for the prosecutor. What about a defence team? Well, although Idema and his men finally managed to acquire a U.S. lawyer, John Tiffany, to represent them, the state of play in the early stages of the trial was rather different:

Bennett finally got a female Afghan lawyer in September 2004, ten days before the final verdict. She met Bennett ONE TIME for 20 MINUTES. She promptly informed Bennett that if she represented him Bakhtyari would not allow her to speak because she was a woman, and he did not normally allow women to appear in his court without a Burka. Then she dropped the real bomb-- if she appeared in court for Bennett, she would be murdered.

Now, if the Islamofascist judge, the resentful, ex-KGB prosecutor and defence lawyers placed under threat of death should they appear in court weren't enough, there's also the complete lack of evidence against Idema and his men.

Let's be clear about this. I'm not saying the evidence presented by the prosecution was weak, or flawed, or fell apart under cross-examination. The prosecution simply produced no evidence against Jack Idema whatsoever. No photographs showing marks of the torture Idema supposedly committed, no sworn-in witnesses. Nothing.
Even more galling, when Idema and his men attempted to present evidence that, in a normal courtroom, would have cleared them, the following occurred:

Jack read the law about being able to call a witness and Bakhtyari said, "ok, call your witness." Fatah handed a secret note up once again. This time to Prosecutor Dawari, who read it, smiled, then handed it to Bakhtyari. The Taliban Judge read the note, chuckled, then said, "We will save calling witnesses until the next hearing and you can do it then, this hearing is finished." After four more hearings, and a verdict of guilty, the defense had still not been allowed to call a single witness or ask a single question of any of the terrorists who said the were hung upside down at the first "press conference" which Bakhtyari later called a hearing.

Let's put all of this together. Here we have a 'trial' in which:Question: What best describes the September 2004 trial? A shameful miscarriage of justice? Or, as the BBC would have it, 'almost comical chaos'? The answer to this one should really be a no-brainer.

So what can we do about this? Well, for bloggers, there's the weekly Free Jack Idema Blogburst. We are still really, really, really desperate for more people to get involved with this -- The only way we can help Jack, Brent and Ed is by getting the truth about the case out to as many people as possible. Obviously, the more of us there are posting on this topic, the greater chance there is that our voices will be heard.
Anyone wishing to sign up for the Free Jack Idema Blogburst should email Cao or Rottweiler Puppy for details. If you want to know more about the story, Cao's Blog has a large section devoted to Jack Idema. There's also a timeline here, and, of course, a huge amount of information is available over at SuperPatriots, without whose work none of us would have learned about Jack's story.