Each time I write about the plight of Jack Idema, the U.S. Special Forces soldier illegally imprisoned in Afghanistan along with his right-hand man, Brent Bennet, and Emmy award-winning journalist, Ed Caraballo, I'm conscious that I haven't really talked, in detail, about Jack's relationship with the Afghan troops he trained and fought alongside.
There are two, conflicting, accounts of Jack's involvement with the Afghan military:Clearly, both these accounts can't be correct. And, clearly, war-zones around the world are filled with various adventurers, mercenaries and bounty hunters. This is the reason why MSM's claims to have never heard of Idema prior to his arrest in 2004 are so damaging -- They add credence to the U.S. and Afghan governments' assertion that Jack was a rogue-operator, and, effectively, deflect interest from the case. After all, there's a big difference between imprisoning a mercenary serving himself and imprisoning a U.S. soldier serving his country.
It's for this reason those of us involved in the campaign to see justice done in this case are so keen to stress both Jack's past military record and the duplicitous nature of big media, which first reported on the work Idema was doing in Afghanistan, then denied all knowledge of him a year later.
To settle this, however, the Free Jack campaign doesn't have to rely on self-serving journalists and government mouthpieces -- We can actually call on the testimony of people Jack Idema fought alongside in the battle to rid Afghanistan of the Taliban and al-Qaeda. These are the men of the Northern Alliance (properly, the United Front), and to understand how they fit into Jack Idema's story, it's necessary to understand a little of their long and honourable history defending Afghanistan from Her enemies.
Much of this success can be attributed to one person, Commander Ahmad Shah Massoud. Though sneeringly described as a 'warlord' by MSM, Massoud was actually a highly educated and moderate man who believed passionately that the future of Afghanistan should be both democratic and free of fanaticism. Fortunately for the Afghan people, Massoud was also a military genius, responsible for inflicting a staggering 60% of the total casualties suffered by the Red Army during the Soviet occupation.
After the Russians were expelled, Massoud set up democratic rule in the regions of Afghanistan his forces controlled, spending the remaining years of his life struggling to remove first the murderous Hekmatyar, then the Taliban, from power.
You can read about Massoud's life here, but what must be understood about this remarkable man is that he, as well as those who followed him, are exactly the kind of people we need on our side in the WOT.
Here's Massoud on democracy:

The future government should be formed through elections by the people. Men and women should take part. The only form of government, which can balance the different ethnicities, is democracy.

And, again, here's Massoud's reaction to the Taliban's demand that he leave Afghanistan after they seized power:

Is it just that when we were in Kabul leading the country, when we had the people's consent, we promised to protect them, to defend our independence and to take care of Afghanistan and its people and now that these people are in great danger we would leave them? Is this really justice? I do not think it is justified. I will stay in this country until my last breath and resist. I am convinced that, God willing, Afghanistan one day will be free.

Commander Ahmad Shah Massoud, the Lion of Panjsher, was assassinated by al-Qaeda suicide bombers on 9th September, 2001.
Two weeks after that Jack Idema arrived in Afghanistan. He, and hundreds of other Special Forces soldiers, were under orders from coalition leaders to train and equip Northern Alliance forces in order to remove the Taliban. This, of course, was exactly the sort of work that Idema specialised in -- After stints in Haiti, El Salvador, Thailand and Lithuania, he was one of the most capable men in the world at pulling ragged, ill-equipped armies together into crack fighting units. You can read press reports archived at SuperPatriots which detail some of the work Jack did with the Northern Alliance here, here, and here, but this is only part of the story.

See, although MSM were chiefly interested in Idema during 2001, the Northern Alliance troops he trained and served alongside for three years deserve a hearing too. They're brave soldiers, most of whom have spent their whole adult lives fighting for a free and democratic Afghanistan. What's more, several of them were tortured, tried and imprisoned alongside Jack, Brent and Ed in September 2004.
One of these men, Major Ezmerai Amin, has this to say about Idema and the state of Afghanistan under Karzai:

Commander Massoud was right. But Massoud told us to follow his way, and I have dedicate my life to follow the way of Massoud because to save my country and the world. And my commander has too. This is why our people follow Jack, because he follow Massoud's way. One time when I was still in Pulacharke I was very sad, and I said to Jack, fuck Massoud, because we follow Massoud's way we are in prison. Then Jack remind to me that Massoud would never give up, he would keep to fight to make real freedom not freedom only for the rich people. We talked about how Massoud would not allow a road to be built to his village until all the country had roads. But this government, they buy rich cars and build roads to their villages while people are still starving and with no doctors.

Major Amin, like the other Afghans imprisoned with Jack, was released after their case went to appeal a year ago -- Jack, Brent and Ed should have been freed at that point too, but the U.S. State Department and FBI put pressure on the Karzai government to illegally continue their detention. What's worth noting, though, is that Major Amin pays Jack Idema the highest complement he can -- He compares him to Massoud, modern Afghanistan's greatest hero.
Then there's Lieutenant 'Zorro' Rasuli:

Actually, Jack took me with him for just one month from General Atta, but I don't know why he trust his life, his power, and everything on me, but I can say one thing; after the death of our leader Commander Massoud he will now be my commander on the rest of my life, and in any place I'm waiting for his orders.

Zorro means this. After he was released along with the other Afghans convicted with Idema, he elected to remain in prison until his three American compatriots are free.

So, question: if Idema were nothing more than a mercenary out to make a quick buck, why is it that he inspires such loyalty among Northern Alliance troops? The answer to this one should be obvious -- The Afghan soldiers Idema trained and fought with see, in him, a similar commitment to rid the world of terrorism as the one they feel.
Here's New Yorker writer, Jon Lee Anderson, offering us an insight into how this camaraderie played out during the war to remove the Taliban from power:

On the way down the mountain, Jack, who was armed and wearing full combat regalia, clambered onto one of the mujahideen tanks with a tin of white paint and a brush. He wrote, "N.Y.P.D." on the tank's green steel carapace. The mujahideen smiled obligingly and asked to borrow his paint. In lacy Farsi script they added the words "Dear Massoud, we will follow your way."

Right now, three of men who fought that war are stuck in prison at the behest of the State Department. Meanwhile, just this week, President Karzai begged Taliban scumbag-in-chief Mullah Omar to 'get in touch if he wanted peace'.

It's difficult, not to conclude that something's going badly wrong with a war in which we offer amnesty to the chief architects of 9/11, while imprisoning the men who risked their lives to bring these animals to justice. 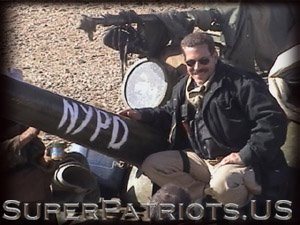