The Beeb reports that the history of the British Empire should be covered in schools.

School history lessons should focus more on the British Empire to explain modern UK life, a think tank says.
MPs and historians were among those who contributed to the Fabian Society's review on "Britishness".

John Denham MP said: "We need to learn to tell our history so that it explains why so many people have roots in other parts of the world."

Naturally, the Beeb illustrate this story with this picture. 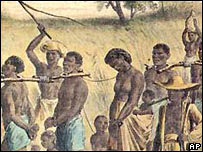 You know what? I approve. Because people will wonder why it is that a brown-skinned gentleman with a whip should be holding sway over a group of slaves. As Snafu points out:

Is the man with the whip working for the white colonial oppressors or the local tribal leaders who supplied the slaves!?!

No doubt Al-Beeb would teach us that the gentleman with the whip has been pressed into service by the evil whities, ignoring the fact that the slave trade could never have occurred had not the tribal chiefs in Africa been quite happy to hand over slaves in return for armaments and shiny beads.

Slavery was common and widespread in Africa long before the 19th century, perpetrated on Africans by Arabs or other Africans, usually but not always of a competing tribe. "Slavery was endemic in Africa, part of the structure of everyday life," Fernand Braudel has noted. "Slavery came in different guises in different societies: there were court slaves, slaves incorporated into princely armies, domestic and household slaves, slaves working on the land, in industry, as couriers and intermediaries, even as traders" (Braudel 1984 p 435). Two aggressive slave-trading civiliified it out of all recognition, and during the 16th century Europe began to outpace Islam in the export traffic. The Dutch imported slaves from Asia into their colony in South Africa. The United Kingdom, which held vast colonial territories on the continent (including South Africa), made the practice of slavery illegal in these regions. Ironically, the end of the slave trade and the decline of slavery was imposed upon Africa by its European conquerors. This action is what today may be called an instance of cultural imperialism.

Wow! Cutural imperialism=good! Who would have thunk it?

Still, no doubt, Al-Beeb would also gloss over the fact that it was the British who were key in bringing an end to slavery.

In 1772, a legal case concerning James Somerset made it illegal to remove a slave from England against his will. A similar case, that of Joseph Knight, took place in Scotland five years later and ruled slavery to be contrary to the law of Scotland.
Following the work of campaigners in the United Kingdom, the Abolition of the Slave Trade Act was passed by Parliament on March 25, 1807. The act imposed a fine of £100 for every slave found aboard a British ship. The intention was to entirely outlaw the slave trade within the whole British Empire.
The Slavery Abolition Act, passed on August 23, 1833, outlawed slavery itself in the British colonies. On August 1, 1834 all slaves in the British Empire were emancipated, but still indentured to their former owners in an apprenticeship system which was finally abolished in 1838.

And given the howls for compensation from displaced Africans around the world, especially in the US, I do find this paragraph quite wonderfully ironic.

Slavery persists in Africa more than in all other continents. Slavery in Mauritania was legally abolished by laws passed in 1905, 1961, and 1981, but several human rights organizations are reporting that the practice continues there. The trading of children has been reported in modern Nigeria and Benin. In parts of Ghana, a family may be punished for an offense by having to turn over a virgin female to serve as a sex slave within the offended family. In this instance, the woman does not gain the title of "wife". In the Sudan slavery continues as part of an ongoing civil war. Evidence emerged in the late 1990s of systematic slavery in cacao plantations in west Africa, see the chocolate and slavery article.