What the sodding fuck is wrong with this country? 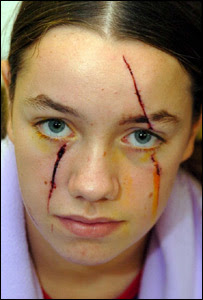 A 12-year-old girl slashed across the face by another pupil says she wants to return to the school where it happened.

Shanni Naylor needed 30 stitches in her face after the assault during an English lesson at Myrtle Springs School in Sheffield on Wednesday afternoon.

It is believed she had intervened to stop her assailant bullying another pupil the day before.

A 12-year-old girl was arrested in connection with the attack and released on police bail until December.

It is thought the attacker used a blade from a pencil sharpener to slash her victim.

Her attacker was another 12 year old girl, who jumped up and slashed her in the class! What the hell is going on in this country?

More pertinently, what is going to happen to her assailant?

A spokesman for headteacher Ed Wydenbach said: "I can confirm there was an incident in school which was dealt with accordingly. A knife was not involved."

Wow, that sounds really harsh, eh? What do you think the chances are that she will get absolutely stuff all punishment? I mean, if the judge is in a really bad mood, the little scrote may get a couple of hours community service.

In my opinion, this is what should happen.

This kind of thing is utterly unacceptable and should not, under any circumstances, go unpunished.

(Via Politicalog, who is similarly incensed.)
By Devil's Kitchen at October 21, 2005